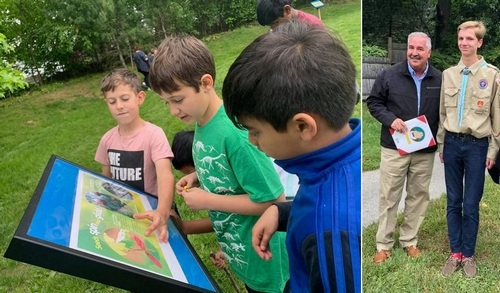 Above: All summer, children can enjoy Woodward’s StoryWalk® combining literacy, science, and outdoor activity. The displays were dedicated to the former principal and installed by a Southborough Scout. Thanks to that Scout’s volunteerism, Finn students will be able to enjoy their display soon after school begins.

Last Friday, I told you about a temporary StoryWalk® at Chestnut Hill Farm this summer. It’s not the only display you can take advantage of this summer.

In the past years I told you about temporary displays you could check out at Finn and Woodward School. But I neglected to tell you about the permanent StoryWalk® stands installed at Woodward last September.

This summer, I’m told that young readers can enjoy “A Seed is the Start” by Melissa Stewart. (You can find the first storyboard near the school’s pathway to Main Street, near the playground.)

We can thank the Southborough Education Foundation and a Southborough Eagle Scout, for kids’ ability to enjoy the displays on Woodward’s lawn year round. And, starting in the new school year, expect the same opportunity on the Finn School campus.

Last year, the Woodward displays were launched with a dedication to former Finn & Woodward Principal James Randell (who had retired in June.) The sturdy storyboards allow for easily switching out the displayed picture book pages.

According to the Community Advocate, the initial story was “A Fine, Fine School” in recognition of Randell’s success in running the Pre-K-1st and 2nd-3rd grade schools. You can read more about that ceremony here.

Thanks to the same people who made the Woodward displays possible, storyboards have been installed at Finn to be launched at the start of the new school year.

The displays were funded in part through a grant from SEF, started under former Finn & Woodward librarian Jean Donolon. Current school Librarian Lori Winer updated me on the completion of the Finn project this month.

Winer wanted to acknowledge the special efforts of Southborough Boy Scout Alexander Forrest. The Woodward installation, by the former Woodward student, was part of his Eagle Scout project. (The CA article last fall also credits Public Works with help on the Woodward installations.) But even after he graduated from Algonquin at the start of the month, Forrest volunteered to see the Finn project through, installing the posts and storyboards:

in the true spirit of giving of himself to his community, he voluntarily installed the Finn School StoryWalk as well this summer before going off to college. Alexander, along with his family and some friends, completed the installation the other day.

Below are some photos from the Woodward dedication last September, students enjoying the new book in the spring, and pictures of the new displays at Finn. (Most are from the Woodward Facebook page, the Finn photo is contributed)