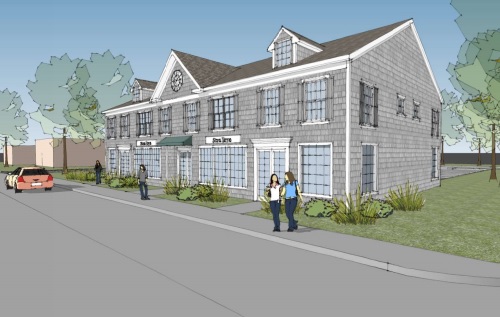 Above: Plans to bring a mixed use building downtown will be one of several items in front of the Planning Board later this month (image cropped from plans)

The Planning Board’s hearings scheduled for July 22nd include three worth specially noting. The board will open hearings on Fayville Hall and 2 East Main Street. They will also hold the continued hearing on St. Mark’s application to install field lights.

The renovation of the historic Fayville Hall includes the parking lot site plan and details on improved accessibility. As included in the developer’s bid on the property, the project will leverage the Adaptive Reuse of Historic Buildings bylaw. The facade will be preserved/restored. You can find past coverage here and submitted plans here.

2 East Main Street’s project is for a mixed use building on the barren lot at the corner of Main St and Newton Street. Wicked Local’s coverage recaps the situation with the owner characterizing four upstairs residences as hotel housing, due to zoning restrictions. You can read about that here and past blog coverage here. Click here for the submitted materials for the July 22nd hearing.

As for the Clark Field lighting project, that hearing opened on Monday night. No one spoke out against the project that night. That may not be the case at future hearings.

I was copied on an email from the president of the Southborough Historical Society to the head of St. Mark’s School objecting to the project. Michael Weishan wrote:

It has come to the attention of the Southborough Historical Society that St. Mark’s has requested permission to install 70’ light pylons to illuminate the field directly behind the historic St. Mark’s Cemetery and the Southborough Museum. We are heartily opposed to this request and ask you to reconsider it. We have already seen the disastrous results of putting these monstrous light towers in front of the Woodward School: they make the area look like a K-Mart parking lot and completely destroy the approach to the historic town center. I highly doubt that is the effect you wish to create at bucolic St. Mark’s, especially as this field has huge historical significance: it is, in fact, the former colonial muster-grounds, where the militia practiced for over a hundred years, and where our valiant residents gathered before they marched off to fight the Battle of Lexington and Concord.

The message went on to write about environmental impacts and finished by suggesting that if the school needs to light a field, they may want to consider the one closest to the solar panel array. Scroll down for the rest of the message.*

Weishan wasn’t the only one dismayed and making comparisons between St. Mark’s School’s project and Choate field.

On Monday, Planning Board member Meme Lutrell referred to the tall field lights as looking like they belong on the MassPike and said it was a shame they were popping up all over town. Citing concerns of Woodward School abutters about the spillover of Choate lighting, she asked St. Mark’s representatives if theirs would point down better.

The school’s contracted engineer Megan Buczynski responded that the fixtures would point down better. She also noted that LED lights they plan to use have less spillover than the HID (High Intensity Discharge) lights at Choate. As an example, she explained that in past baseball field projects, bullpens weren’t lighted since they could rely on spillover from the field lights. With the use of LED lights, the spillover hasn’t been enough and extra lighting is now added for bullpens and pedestrian areas near ball fields.

Chair Don Morris told school reps that lighting itself isn’t the board’s only concern. He said that the increased lighting impacts use via potential increased traffic.

Morris explained that if drivers are coming in for a night game and looking for parking while another game is still in progress it can cause traffic issues. He indicated that they should be prepared to explain how they plan to avoid or handle that.

Morris also made clear that the lighting hearings will be a moot point if the school doesn’t get variance approval from the Zoning Board of Appeals. Since they are scheduled to go before that board on July 17th, he allowed the Planning hearing to open. But a decision will have to wait until a ZBA decision is rendered.

Click here for the Planning Board’s documents on the project.

In addition, there is the environmental damage these lights cause. Let’s forget for a moment the tremendous carbon cost of installing and running night lighting. All over the world, night skies are disappearing, and a majority of the inhabitants of North America can no longer look up from their homes and see the stars. Additionally, this light pollution is adversely affecting numerous species already stressed by the climate crisis.

For hundreds of years, our children, and your students, have grown and matured into productive, hard-working citizens without the dubious benefit of illuminated playing fields. Given there is no apparent advantage to the human species, and clearly documented harm to many other species caused by these installations—not to mention the aesthetic destruction to our town fabric—I would ask St Mark’s not to make the same mistake the residents of Southborough made in approving the lighting for these fields. Few of us had any idea how ugly and destructive they would be. And since we can’t undo our mistake, why not use our town fields for the occasional night game? I’m sure St Mark’s and the town could come to some agreement. But if, after weighing the environmental damage, you MUST light yet another a field, perhaps the one closest to your solar array and out of public view might be an option.

Thanking you in advance for your consideration,

It’s apparently not enough that these exclusive schools contribute close to nothing to the town in property taxes, they also want to conduct nighttime athletic events adding light and traffic pollution to OUR town.

We are already putting up with traffic jams, parking issues and trash generated by events held on the school grounds at both Fay and St. Marks.

As correctly pointed out, the lights added at Woodward School are, in a word, HIDEOUS. All that for so-called ‘must-have’ nighttime events. Sorry, when it gets dark, go home.

This town DOES NOT need the added light pollution, nor does it need added nighttime traffic. Our public safety department spends its time out on route 9, leaving the residential streets to speeding commuter and parent/kiddie chauffeuring (also speeding!) traffic.

NO THANK YOU TO ADDED LIGHTING – and all its attendant nuisances.