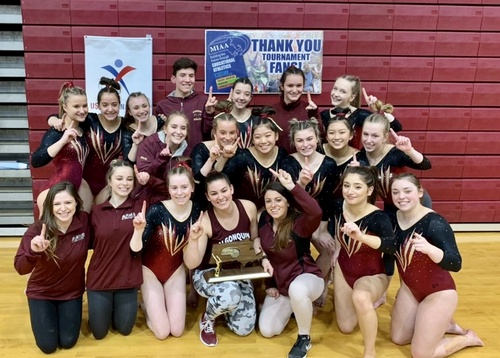 Above: THawks Gymnasts are asking the community to show its support from Algonquin’s bleachers tomorrow. (image contributed)

As I’ve previously posted, Algonquin Gymnasts will compete in the State Championship tomorrow, Saturday, February 29th. The South Sectional winning team is hosting the competition at 3:00 in the ARHS gym. They’re asking fans to come out and cheer them on.

I also shared that Girls Ice Hockey would be in the playoffs soon. I failed to note that the Girls don’t have sectionals. That means they’re heading straight into the Division 2 state tourney.

The THawks’ 1st Round matchup against lower seed Westwood has been scheduled. It will be this Saturday at 1:30 pm at Ryan Arena in Watertown. If the 8th seed Girls win, there’s a good chance they’ll face topseed Wellesley in the Quarter Finals.

Boys Hockey didn’t overcome an upperseed challenge in its playoffs. The Boys fell to Marlborough (1-2) in the 1st Round of Central Mass Sectionals. (You can see photos of the action in the Telegram.)

Boys Basketball won its First Round in Division 1 sectionals on Monday. The team beat Holy Name 63-56.

That win pitted them up against topseed St. John’s for the Central Mass Quarter Finals. It was a longshot, given that the Pioneers beat them 79-50 and 67-57 earlier in the season. They went into halftime tied. But St. John’s pulled ahead in the second half. THawks ended their journey, only racking up 41 points vs St John’s 63. (You can read details in the Telegram.)

In Monday’s post, I included the athletic schedule listing that showed Indoor Track teams heading to the New England Championship. The tournament competitor list has since been posted and no ARHS students are on it. So, that confirms the end of their journey as well.

There are six other THawk athletes still in post-season competition. The Girls and Boys Ski Teams are sending members to the state Alpine Ski Tournament on Wednesday. 5 Girls and one Boy are slated to compete on March 4th. The races begin at 9:30 am at Berkshire East Mountain Resort in Charlemont.