Above: Citizen Petitioners will seek to gain voter support for a bylaw to reduce “detrimental” noises overall and regulate more peaceful hours in town. The community is invited to upcoming info sessions to learn more. (image edited from flyer)

Some residents were disappointed that selectmen dropped the placeholder for a noise bylaw Article for this year’s Annual Town Meeting. Rather than waiting for the Town to take the reins for a future year,* they pushed on with their own efforts.***

They drafted their own proposed bylaw as a Citizen Petition Article. (Click here to read the full language.) Peter LaPine and Lisa Dunderdale are leading the initiative. While basing the bylaw on another Town’s successful effort, their proposal puts more restrictions on decibel levels for commercial landscaping and includes higher fines.

Now the organizers are courting support for the Article at Town Meeting. Three info sessions are planned to explain the intent and answer questions. The first, this week, is an informal “Drop By” opportunity to get more information. Two follow up sessions at the Library will include presentations.

• Citizens have the right to a healthy environment and quality of life, and business owners provide services to our community. Let’s find balance and harmony so all can prosper.

• Clear guidelines to report noise complaints, enforce the by-law, and keep our citizens and workers safe.

• Maintenance, Landscaping, Development and Construction can be done in a residential friendly way with a bylaw.

• Surrounding towns have Noise Bylaws that are easily enforced and approved by the Attorney General.

You can hear directly from petitioners at one of the following events: 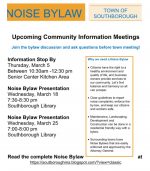 Information Stop By in the Senior Center Kitchen Area

Southborough doesn’t have any bylaws to restrict excessive noises. In 2016*, Police Chief Kenneth Paulhus told to selectmen that his officers try to mediate when there are noise complaints. Yet he advocated for “something on the books when push comes to shove” over extreme issues. Proponents are looking to pass a bylaw at Town Meeting this month. (That opens on Saturday, March 28th.)

As the population of Southborough grows, it has transitioned from a rural community to one that is more suburban. People move to Southborough to enjoy its natural beauty and peaceful environment. With increased housing density, practices of earlier times increasingly encroach upon the tranquility of Town residents, resulting in conditions characterized as being out of balance. There is an ever-growing requirement to place limits on these practices – a rebalancing – so that everyone, business owners and homeowners alike, may prosper. This article, a Noise Bylaw, seeks to harmonize the needs of Town residents with those of local business owners.

At last week’s Board of Selectmen meeting, selectmen voted 4-1 to “Not Support” the Article. They again advocated for taking more time to work up a version that incorporates public feedback for a future Warrant.

Some selectmen questioned the enforceability of the bylaw as proposed. It leans heavily on sound meter readings. According to the board, that was a concern that they heard from Chief Paulhus. LaPine countered that that officers can use their discretion. He claimed that other communities have said just an officer’s warning without pulling out meters has usually been sufficient.

Selectman Marty Healey questioned if the bylaw would overburden the police by requiring them to follow up to measure sound complaints. He pointed out that the chief recently convinced them he needed more officers to cover current policing needs.

LaPine has taken the position that noise restrictions (and fines) are only enforced when neighbors complain. He has opined that neighbors will be reasonable, communicate with each other and not make excessive, petty complaints. That’s an assumption that Selectwoman Lisa Braccio disagreed with in last week’s discussion. Referring to potential bad blood, she rebutted that you never know what neighbors will complain about.

In earlier email communications with proponents, I learned that the Article is modeled after a bylaw passed in Billerica. Petitioners say that that the bylaw hasn’t caused problems according to that Town’s public safety officials. Still, it’s worth highlighting that the Southborough Article was edited to be more restrictive.

The difference that jumps out relates to landscaping and outdoor projects. Proponents of a Southborough bylaw aren’t just trying to carve out some quiet hours. They have made clear they have concerns about detrimental noise levels of some equipment used by commercial landscapers in residential areas. The proposed bylaw seeks to restrict that.

The maintenance of real property (not construction), such as the temporary use of power tools and equipment such as lawn mowers, chain saws, septic pumping trucks and similar equipment, provided said activities take place between the hours of 7:00 AM and 10:00 PM on any day.

The Southborough Article strikes that and instead exempts:

The intermittent or occasional use, during the daytime, of homeowners’ light residential outdoor equipment

I tried to get a better grasp on what would/wouldn’t be allowed.

In back and forth emails with LaPine and Dunderdale, I posited that the bylaw would only allow equipment owned by homeowners rather than their landscapers. Did that mean that homeowners would have to provide landscapers with equipment to use? I was informed that commercial landscapers can look to to other sections of the bylaw for maintenance noise standards they can work under.

But my reading of those restrictions** is that in residential areas, commercial landscapers would be limited to 70 dBA or lower.*** That is lower than any of the listed “typical” leaf blower dBAs listed in in a bylaw table (see image right). (There was no chart for dBAs of lawnmowers or other equipment.)

I should clarify that the dBA restriction refers to the noise detected beyond property lines at a minimum distance from the source. For maintenance, that is 50 feet. But there was no clear/consistent answer for how much to expect decibels go down at that distance. (One example I was sent indicated that even a standard mower would exceed the dBA at 50 feet.) So, I was unable to get clear understanding on what the impact would be for commercial landscapers or homeowners who hire them. (That exchange was two months ago when petitioners were just getting started. Answers may be better clarified in upcoming presentations.)

[Editor’s Note: On March 5th, LaPine clarified to me “A mower making 85 dBA at tis source will likely have a sound level drop realized at 70 dBA over 50 feet.” Many commercial mowers are louder than that as are the leaf blowers in the chart.]

LaPine stressed to me that the bylaw hasn’t stopped plenty of landscapers from working in Billerica. But, as I pointed out, Billerica’s landscapers are exempted from the restrictions from 7:00 am to 10:00 pm daily. That would not be the case under the proposed Southborough bylaw.

While I presumed that change would be the most controversial in our town, it wasn’t the only edit. There are two additional Billerica exemptions not included in the version for Southborough Town Meeting:

Five exemptions are carried over from the Billerica bylaw:

Consistent with Billerica’s bylaw, but raised by selectmen as a potential concern for them, is a section that requires motorcycles to have mufflers. [Editor’s Note: LaPine points out that there are already state laws on motorcycle noise levels with RMV in charge of regulations limiting noise. But I was unable to find a reliable source to indicate what the current rules are. A 2017 RMV document seemed less stringent, but it may be outdated. So I’m still including this section, since it is in the bylaw.]:

Motor vehicles or motorcycles operated on public ways in the Town of Southborough or in any place where the public has the right of access as invitees or licensees may not exceed a maximum sound level of 85 dBA. It is also in violation of the Bylaw to operate a motor vehicle or motorcycle without a sound-limiting device connected to the exhaust system. This prohibits so-called “straight pipe” exhaust systems. This section shall not include screeching sounds emitted from emergency braking. Measurement for the purposes of this Section shall be at a distance of 36 inches from the noise source.

The question was raised, would that mean police have to pull over motorcycles passing through Town? LaPine pointed out there are state laws. He also suggests that officers can use their discretion about whether or not to enforce to the letter of the bylaw. He positions it as a tool at their disposal for when it is needed.

If it is enforced, the proposed bylaw would fine violaters at a rate of doubles (or more) than Billerica’s penalties. The first offense would be $100 and $250 for the second. Third offenses and beyond are $300 per “day or part thereof”.

*Discussing placeholder articles in December, the majority of selectmen decided to table proposals for a Noise Bylaw Article. They discussed taking more time to gather community feedback and draft a bylaw for next year’s Town Meeting. A similar sentiment was expressed in February 2016 when the board decided the Article wasn’t ready for Town Meeting that year. Yet, there was no public follow up by the BOS until last summer. That was when Selectman Sam Stivers reported he was working on a draft for the ATM 2020 Warrant. In December, Stivers and Chair Brian Shea were the only selectmen who voted to try to get a version ready for this year’s Town Meeting. The others opted for a longer term approach.

** Editor’s Note: In my email exchange with petitioners over how the Article allows commercial landscaping, I was referred to the following Maintenance Noise standards:

The referenced section 1.4, includes a table that refers to the following Noise zones defined under section 1.3:

NOISE ZONE I: All properties utilized as residential uses in accordance with the Town of Southborough Zoning Bylaws and the grounds of any school, hospital or similar health care institution, house of worship or library while the same is in use, and any Cemetery or Open Space.

NOISE ZONE II: All other property used in accordance with the Town’s Zoning Bylaw.

It shall be unlawful for any person at any location within the area of the Town to create any loud noise, or to allow the creation of any noise, on property owned, leased, occupied or otherwise controlled by such person, which causes the sound level when measured on complainant’s property to exceed the greater of:

A. The maximum allowable exterior sound level outlined in Table I; or
B. Five dB over the background sound level.

If the intruding noise source is continuous and cannot reasonably be discontinued or stopped for a time period whereby the background sound level can be determined, the measured sound level obtained while the source is in operation shall be compared directly to the maximum allowable exterior sound level outlined in Table I.

***Updated (3/5/20 1:09 pm): I received notes from LaPine about what he considered inaccuracies in the initial post. It included an error that I made and some details that weren’t clear enough. So, I’ve made some edits.

Updated (5/21/21 5:40 pm): The original website link didn’t work this spring. But proponents had a new url for the website touting their initiative.