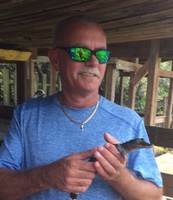 Stephen G. Balboni, 60, of Marlborough and formerly of Southborough, passed away suddenly on March 4, 2020 at his home.

He was the son of the late Henry L. Balboni and Joan (Lynch) Balboni Barry.

Steve worked for Pacific Packaging Products of Wilmington, for many years as a truck driver. He enjoyed riding motorcycles, tending to his treasured Toyota Tundra and his long vacations to Florida to visit his best buddy Harlow. He was also an avid Patriots fan and loyal Trump supporter. His greatest pride and joy was his daughter, Elizabeth.

He is survived by his daughter Elizabeth Balboni and her fiancé, Ryan Tibbetts; several cousins and close friends.

Visiting hours will be held on Thursday, March 12, from 5 to 7 pm at the Morris Funeral Home, 40 Main Street, Southborough.

A funeral Mass will be held on Friday, March 13, at 10:30 am at St Anne Church, 20 Boston Road, Southborough. Burial will follow in St. Patrick Cemetery in Natick.

In lieu of flowers, memorial contributions may be sent in Stephen’s memory to the Wounded Warrior Project. Box 758516, Topeka, KS 66675, or https://support.woundedwarriorproject.org/donate.