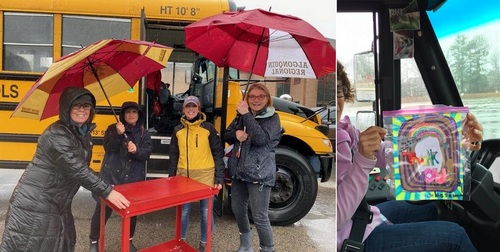 Above: School nurses are riding buses each weekday to deliver lunches to students in Southborough and Northborough (contributed photos)

Have you seen school buses in town and wondered what they were up to? After all, you know they can’t be be driving students to school.

These days, the only passengers on our school buses have been Northborough and Southborough school nurses. The nurses have been using the district buses to bring school lunches to over 250 students whose families signed up. They also delivered many online devices (chromebooks/ipads) to students who need them for remote learning.

Still, that only accounts for a handful of the 32 buses on contract for Northborough and Southborough public schools. Which leads to the subject of this post — the district’s plans to negotiate a revised contract for the remainder of the year.

Lavoie (the former Trottier Principal) started his new role as the Director of Operations after February break. It was just in time to help the schools handle challenges about to come.

Prior to the school closure, Lavoie worked with Food Services on the likely event. They began mobilizing the supplies and food they would need for lunches that could be handled the right way.

For each student signed up, the schools are providing two bagged lunches. According to Superintendent Gregory Martineau there was a financial impact for food service, but it was the right thing to do. At first, the school wasn’t getting any reimbursement from the USDA. Apparently the program didn’t qualify because the schools don’t have a summer lunch program. Martineau said that changed over a week ago, with three waivers granted.

Initially, Southborough families picked the meals up daily at Trottier Middle School (and Algonquin for Northborough).

Devices could also be picked up at that time. Devices are owned by the school. The tech department prepared each for students’ use at home. In some cases, the school also provided wifi “hot spots”.

After a couple of days, with the stay at home advisory issued by the Governor, the administration realized pickup would no longer work. Lavoie quickly coordinated with NRT, the district’s school bus company, to have school nurses driven to students’ homes instead. Lavoie told the school committees that NRT was understanding and cooperative through the changing process. The administration created routes that had to be adjusted as new requests came in. Four buses were organized per town to reach the over 100 families signed up across the district. The devices were delivered separately using 2 buses.

Wellness Director Mary Ellen Duggan confirmed for me that nurses were selected for the task due to safety concerns:

as registered nurses, we are well versed in precautions needed to ensure safety and decrease the risk of spreading the virus.

This opportunity also gives the nurses a chance to check in on the well-being of those receiving lunches – ask if they are doing okay, if they need anything or have any questions (from >6 feet away – of course). It has been rewarding for the nurses as well as for the students to see a familiar face and connect from a distance. We are happy to be able to assist our community at this time. Please note, this is NOT the only thing the school nurses are busy doing during the school closure, but it is one of the more rewarding things.

I asked Duggan to share some photos and she delivered. Below are pictures from rainy Friday, along with a few thank yous they received:

The district is seeking to renegotiate the terms of this year’s bus contract. Not only are costs for unused buses ones that taxpayers won’t want to bear – but legally, the school can’t pay for services/goods not delivered. An example given last week was paying fees for fuel that wasn’t used.

The school committees agreed to support the approach recommended by DESE (the Mass Dept of Elementary and Secondary Education). DESE will provide district administrations with a list of all of the districts using the same bus company. Districts will then work together, appointing 1-2 representatives to serve as negotiators for the whole group.

The approach is indended to streamline the process, reduce legal fees for everyone, and make things consistent across districts. DESE apparently urged that the schools shouldn’t be overly aggressive. With a shortage of companies and drivers, DESE doesn’t want more bus companies to go out of business.

One expense NRT has still has during the closure is bus driver salaries. According to Director of Finance Rebecca Pellegrino, the company can’t risk losing them by temporarily laying them off. Martineau reinforced that schools are slated to reopen in a month. If the bus company let drivers go now, the buses may not be ready to go when the time comes to resume classes.

There was some committee member concern over what the DESE approach would obligate school committees to approve. Pellegrino said that she would try to be one of the representatives in negotiations, or at least ensure someone from a central MA school was. Martineau assured that they could enter individual negotiations if the DESE model wasn’t working out. Any agreement would still have to be ratified by each of the three school committees.

While the renegotiation for this year is going on, the school is also working on a contract for future years.

The transportation contract was already set to expire at the end of this school year. The district had issued an RFP earlier this year. According to Lavoie, they received a low bidder but hadn’t been able to close the contract yet.

At one point during the renegotiation discussion, Pellegrino said it was important to keep the bus company going since the new contract’s lowest bidder was by a significant amount. (Between the lines, that seemed to indicate the low bidder was NRT.)