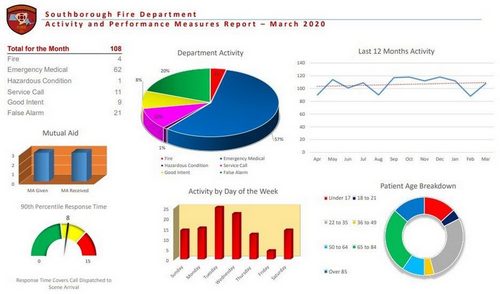 Above: The SFD posted its latest performance measurements.

This week, the Southborough Fire Department issued its Activity and Performance Measures Report for March. I never shared the February report, so I’m including that, too.

Response time appears to be longer in March with a 90th percentile of 8 minutes versus 7:20 in February. January’s 90th percentile was 6.18 for the month with 6.72 reported for the year. It’s not surprising given that new safety protocols were issued and revised last month to reduce personnel’s potential exposure to and spreading of covid-19.

The SFD began issuing the reports in February when it shared data for January 2020 along with some 1-year stats. The times were one of the few stats that were consistently reported across all three months. Between the reports being new and some changes to the metrics included over the past three months, nothing else stands out as a reportable trend or significant change.

Other data that was shared across all three reports was the total number of responsibles and the categories. (Notably, medical responses were highest in January, not March.)

I’ve posted those below for comparison. Click thumbnails to enlarge. (The tables and charts run from January to March.)

The way that Ambulance Response Dispositions had less detailed data in the February report than in January. And the data wasn’t included in the March report, which instead shared new data on “Patient Age Breakdown”. (You can see that right. It looks like the biggest age group was for 22-35 year olds, closely followed by 65-84 year olds.)

The full reports are viewable below.

Thank you for this. I am hoping people can digest the information and understand better how our fire department resources are utilized.