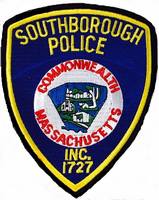 Last week, the Metrowest Daily News covered an incident in Framingham involving police, teens, and stolen cars. A new Facebook post by the Southborough Police Dept shares that their dept played a role in the case.

In a case that reads like a TV script, four teenagers are accused of stealing several high-end cars, with one of the suspects leading police on brief chase that ended in a crash.

Last week’s story focused on the Framingham PD’s role in finding stolen cars and apprehending suspects. Below is today’s post by the SPD describing drag racing and a police chase that took place in Southborough last Wednesday*:

On Wednesday April 8th, 2020, at approx. 1 am in the morning, a Southborough officer in a marked cruiser on Turnpike Road observed two vehicles drag racing (estimated speeds at 110 mph) Westbound on Turnpike Road @ Middle Road. The officer radioed ahead to advise his Sergeant that the two vehicles were headed his way.

The Sergeant observed the two vehicles traveling towards him at an estimated speed of 85 mph. The vehicles accelerated up the driveway of 2 Park Central Drive, and one of the operators fled (on foot) from the scene. An MSP K-9 Officer responded to the scene, but the officers were unable to locate the driver.

The second operator left the area at a high rate of speed, and was last seen heading towards Framingham.

The vehicle that was left on scene, was towed and processed at the Southborough Police Station. The next day, Framingham Police located the other vehicle at a housing complex in Framingham, and a pursuit ensued. Four suspects were apprehended at the conclusion of Framingham’s pursuit.

If you have any information regarding this incident, please contact Lt. Ryan Newell or Det. Keith Nichols at (508) 485-2121. Thank you.

You can read the MWDN article here.

*I inserted paragraph breaks in the SPD’s post to make it easier to read.