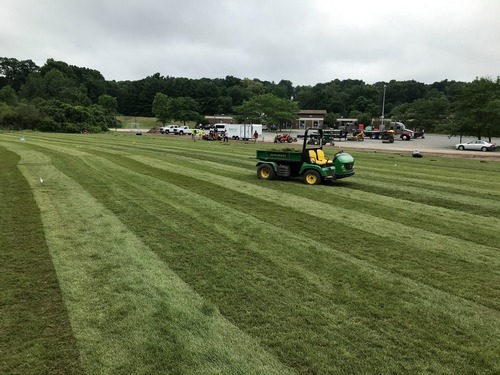 Above: The Town Rec field in front of Neary School is off limits this summer to allow new sod to establish well anchored roots. (from Facebook)

On Monday night, Recreation Director Tim Davis updated the Recreation Commission on projects and programs planned for this summer. Here are some highlights.

Mooney Field & Richardson Courts lighting project – A Planning Board hearing is scheduled for August 10th. Commission Chair Jen Hanson said her understanding from counsel was that it’s not about the Planning Board agreeing/disagreeing with the project. It’s just about whether they are within the legal requirements. As long as the packet is complete with everything required, and the project meets the bylaws and conditions, the board should approve it. They are preparing to complete the packet for next week.

Depietri Field – Davis noted that there were complications finding the water main for the field project in front of Neary School. (Plans from the 90s predated other work done there.) Davis said he believed the project would be completed under budget. The work was finished this week.

Yesterday, Rec posted an update to Facebook, explaining why the public should resist temptation to play on the lush green:

Final stage of the Depietri Field Project! Please note that the field will be CLOSED for the remainder of the summer so the NEW sod can establish. While we know it is tempting, please stay clear so we can ensure its opening for September! Thank you!!!!

Until reopening, the field will be fenced off.

Basketball Courts/Hoops – When the fields reopened for public use, the outdoor basketball courts were one of the few exceptions. New guidelines are about to be posted about the reopening of Town basketball. Stay tuned for an announcement.

Softball field – The DPW will be working on getting the softball field at Trottier back into shape. Northborough-Southborough Girls Softball will be using the diamond as their home field this fall.

With resumption of permitted field use, the department has been collecting fees this summer.

Playgrounds are being power washed monthly due to Covid-19.

The Arts Center Playground – The playground at 21 Highland Street, off Atwood Street, was temporarily closed. Mulch was replaced and the playground was reopened yesterday.

The Town House playground – Davis was hopeful the tot lot off the Town House parking lot could be opened to the public by early next week. (Today, he updated that it will have to wait until late next week.)* The playground is being revamped to be ADA compliant. New equipment has been delivered, DPW employees are scheduled to work on construction today and tomorrow and the inspection was scheduled for Tuesday. (Below are the pic I shot yesterday afternoon, followed by a pic from Rec showing what the DPW successfully built today.)

Movie Nights in August – Rec will soon be announcing movie night plans. To allow a larger, safely spaced crowd, they plan to make use of successful plans implemented for Town Meeting. They will use the same large field area at Neary School and a similar protocol for spacing.

No Summer Concert Series in 2020 – Davis recommended cancelling the Summer Concert series. They had planned to hold the concerts in August with bands that had been booked prior to the state of emergency. He told the Rec Commission that the Phase 3 Guidelines released on Monday complicated efforts.

There are cautions about singing and brass/wind instruments due to the force of expelled air. Performers should be kept 10 feet apart, or singers should wear masks. Davis quipped that he believed that 10 feet is the size of the stage at Neary where past concerts were held. Commissioner Donald Dumont said that given what’s been confirmed about the virus spread through singing, it was one safety measure he couldn’t argue with.

Davis said that other towns he checked with were “calling it” for the summer. Davis thought that they should as well, and save the expense. The Commission agreed. Hansen noted that it is also an event where “kids run around like crazy people”. She said trying to contain them wouldn’t be easy.

Community events – Davis said they are still waiting on guidelines that will impact the big community events Summer Nights, Heritage Day, and the Gobble Wobble. Right now, they are trying to stay positive. At a previous meeting, Davis indicated that Fireworks had been paid for in 2019 but cancelled due to EEE. They hope to use them for Summer Nights fireworks this year even if they can’t hold the other traditional offerings.

*Updated (7/9/20 1:07 pm): The playground at the Town House won’t be ready for public access until the end of next week. According to Davis, the inspection has been pushed out to later in the week. The equipment was successfully built today, but surfacing still needs to be installed. I also included a new pic posted to Facebook this afternoon.

Hey Beth. Do you know anything about the new flagpole in front of the Town House? What is that large bulge near the top?

I was actually working on a post on that on Friday. I didn’t get a chance to finish it. I plan to post today.

The cell tower company that leases the flagpole did some work under a building permit earlier this summer to allow for an upgraded antenna. According to the Town Administrator, the photos in their building permit application indicated the appearance of the flagpole wouldn’t significantly be changing. When a big change became apparent, the Facilities Director and Building Commissioner put a halt to the work. The company was ordered to reverse the appearance – but they have a proposal submitted for selectmen to discuss this Tuesday night.