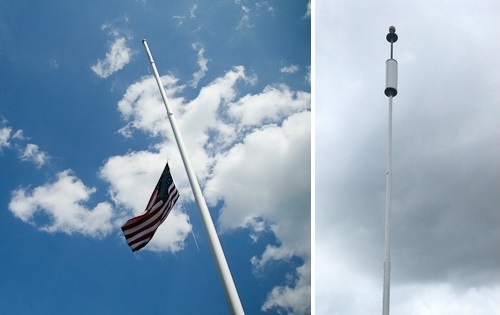 Above: The lack of a flag isn’t the only thing that looks different about the flagpole at the Town House after work conducted this summer. Selectmen will discuss a related proposal from the company leasing the cell tower this Tuesday night. (images L-R cropped from photo by Susan Fitzgerald and photo by Beth Melo)

Some of you may have been surprised to see that the flagpole at the Town House “looks a little funny”, as the Town Administrator noted. The pole now sports a large cylinder near the top. According to TA Mark Purple, changes to the appearance took Town officials by surprise as well.

In June, Purple told selectmen that they “had been sold a bill of goods” by the Crown Castle, which leases the flagpole for AT&T.

Nine years ago, the company sought to enlarge the pole to allow for a bigger antenna in the built-in cell tower. Selectmen rejected designs presented in 2011 and 2012. This spring, the company bypassed seeking the board’s approval before working on a new design. Purple alleges the company’s application for a building permit was misleading.

The company had received approval for work to structurally enhance the pole and switch out some antennas. At the June 23rd meeting, Purple asserted that before and after pictures in the application didn’t show “any discernible changes to the pole”. Once the change was apparent, Facilities Director John Parent and Building Commissioner Lori Livoli halted the work. Livoli instructed the company to return the pole to its previous appearance.

At that time, Purple indicated the restoration would be done within a couple of weeks. As of Friday (when I took the photo right), it clearly hadn’t been. In the meantime, the company submitted a redesign proposal that selectmen are scheduled to discuss tomorrow night.

In the packet for this Tuesday’s meeting, an email from a Crown Castle representative recapped to Purple that options discussed had been constructing “a new larger diameter flagpole in the rear of the property” or “increasing the canister size for the entire pole”. He now pitched a third option that he said would be the best one for AT&T

The design calls for adding a “tapper” on the top. The packet includes the below images for that proposal.

At the June meeting, Purple alerted that Crown Castle would seek approval for a new design. He said that if changes aren’t approved, the company may not extend the lease beyond the contract’s end date this fall. The company has made clear that the old design isn’t satisfying their needs for cellular service reach.

In making his pitch, Crown Castle’s Jeffrey Baradora reminded that the cell tower isn’t just about helping their business. It’s also about cellular service for the area:

ATT like other wireless providers are essential to all types of wireless services including but not limited to 911.

Over 80% of emergency calls are now made from cell phones.

The company has leased the antenna since it was built in 1999. The most recent extension to the original lease was last September. The agreement began with a first year payment of $18,001, with annual payments to increase by at least 3% year.*

Back in 2011, Crown Castle approached selectmen about a proposal to enlarge the flagpole to 28″ to allow a 4G antenna. (The pole was 18″ at the base tapered to 9″ at the top.) Selectmen were unhappy with designs. They asked the company to talk with veterans in town to see if they could come up with a solution.

In 2012, the company came back with a revised design for a straight 16″ pole without a finial ball at the top. That August, the board rejected the redesign.** Selectmen suggested the company propose a different location for a new antenna rather than altering the flagpole.

Baradora’s June 29th email states that the company would “be open to beautifying the land surrounding the pole if that is an option to help mitigate concerns”.

The proposal and lease agreement are listed for discussion on the agenda for the July 14th Board of Selectmen meeting. You can find the agenda here, and related communications from the packet here.

*The lease included a 3% annual increase, but added, “in no event shall the increase be less than the Consumer Price Index Increase for the preceding 12-month period.”  (By my calculations, that should put the lease at about $33-34K per year by now, but I wasn’t able to confirm the figure with the Town in time for posting this story.)

**It’s worth noting that none of the current selectmen were members of the board during the 2011-2012 discussions.