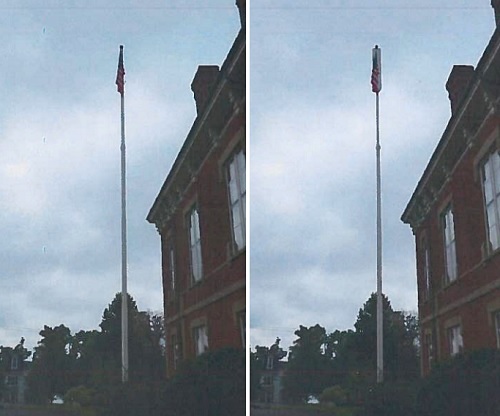 Above: Given the choice of “Before” with no lease money or “After” with continuing $36K+ in annual funds, selectmen chose “Before”. (images cropped from meeting packet)

The Board of Selectmen rejected a redesign of the Town House flagpole this week. Asked which they valued more, $36K in annual revenue or the flagpole, the board emphatically chose the flag. Selectmen want the flagpole restored to its original appearance.

On Tuesday night, the board was asked to consider a proposal from Crown Castle, the company which leases the flagpole with built in cell tower for AT&T. As I previously wrote, the company had made unauthorized changes to the flagpole to allow for enhanced antennas. (See image right.)

Ordered to restore the pole to its original condition, the company was instead seeking approval to complete the work of adding a “tapper” to the top of the pole.

Town Administrator Mark Purple barely got his description of Crown Castle’s redesign request out before Selectman Brian Shea interjected “No”, quickly followed by other selectmen chiming in and shaking heads. Selectman Lisa Braccio characterized that choosing the redesigned the flagpole would “disrespect our veterans”.

VFW Post Commander Steve Whynot said the new flagpole look ruins the character of the front of the Town House. He thanked the board for not “selling out the town”. Veterans Agent Brian Stearns also thanked selectmen for their support. He told them that a yes from them would have set a bad precedent. In speaking with area fellow veterans officers he heard concern that if a Town like Southborough approved the change it could happen in any town. He said “the flag is not meant to cover anything”, it’s meant “to fly”.

Selectmen are willing to continue the lease as long as the cell tower looks like the original flagpole. If the company is unwilling under those terms, they will let the lease lapse.

Chair Marty Healey called a message from Crown Castle’s representative referencing the importance of the antenna for 911 calls disingenuous. He said the company is really concerned about losing customers and if the tower is that important to them, they’ll find a way to make it work.

Selectman Sam Stivers wondered if there was another location that would work for an antennae, rather than losing the lease revenue. Purple noted that it would take work from the company to determine a location with height that works, running tests on radio waves, and approval of a lease by Town Meeting.

Whynot reminded that the company had been instructed years ago to look for a new location and appeared to have not done the work. The Commander raised the question of how long the company would take to restore the pole to original condition. (Currently, the Town is unable to fly the flag from the pole.)

Purple said the company should be “pretty close to having what they need to put it back.” But he acknowledged that the company may drag its feet. Even if Crown Castle chooses to extend its lease, renewal approval isn’t for months. He did assure that he the Building Commissioner and Facilities Director have been “on” the company to make fixes and wouldn’t let up.

Healey followed that the company would be getting a “very stern” letter from Town Counsel (and maybe outside counsel). He stated the contract clearly requires any redesign to be approved by selectmen. He asserted:

It’s hard to have violated a contract more clearly than they have.

Purple opined earlier that if workers had been able to finish the project, they probably would have installed antennas that they shouldn’t have been allowed to without the process the Town has laid out.*

I think they tried to sneak that one past us.

*I believe he was referring to a policy selectmen established for 5G installations that calls for hearings and input from other boards.

seems strange that a contractor would file for a building permit and go ahead with a construction project with out approval from some town official?? perhaps the B.O.S. needs to do more digging to find out if the contractor got a “Go ahead” from some one,

As previously reported in https://mysouthborough.com/2020/07/13/town-house-flagpole-why-it-looks-funny-selectmen-to-discuss-revamped-cell-tower-proposal/

The company had received approval for work to structurally enhance the pole and switch out some antennas. At the June 23rd meeting, Purple asserted that before and after pictures in the application didn’t show “any discernible changes to the pole”. Once the change was apparent, Facilities Director John Parent and Building Commissioner Lori Livoli halted the work. Livoli instructed the company to return the pole to its previous appearance.

Jumping to conclusions per usual.