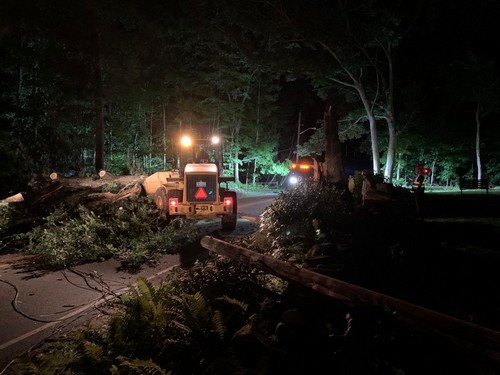 Above: Emergency crews were kept very busy on Tuesday night. Among the emergencies were incidents that trapped some personnel in one section of town for hours. (image from Facebook)

As of this morning, National Grid is reporting only two Southborough customers are still without power, through two separate outages. (Unfortunately for them, the restoration times aren’t estimated until “by” tomorrow morning.)

Yesterday, the Southborough Fire Department shared on Facebook some of the highlights of the SFD and Police response during Tuesday night’s storm.

It turns out that the big power outage in the Oak Hill Road area was connected to an incident that trapped some emergency responders for hours while other emergencies were occurring across town, including a building fire.

At the height of the storm a woman escaped serious injury on Oak Hill Road when a tree struck her vehicle. Live power lines were down and multiple houses lost power. The driver self-extricated prior to our arrival.

While apparatus were on scene, another large tree and power lines came down in the area of 52 Oak Hill Road. Subsequently, a fire engine, ambulance, and police units were trapped on the road. In the end, those emergency resources were unable to respond for close to 3 ½ hours. 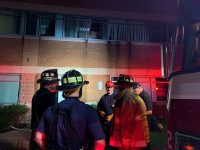 While these units were unavailable, limited reserve FD units responded to a building fire at 371 Turnpike Road, as well as multiple wire and tree down incidents. On duty police were also responding to similar emergency calls.

The building referenced above is also known as the 2 Central Park Drive office building.