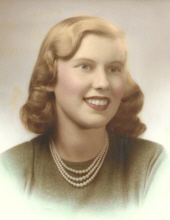 Rosalie A. (Nelson) Hakansson was born in Brockton, MA on January 19, 1935 to C. Raymond Nelson and Ruth L. (Carlberg) Nelson. She was also fortunate to have Margaret (Wall) Nelson as a caring and devoted stepmother after the death of her mother. She was the widow of the late Fred O. Hakansson whom she married on September 9, 1956. She died approximately an hour after midnight on August 1, 2020, at The Morrison in Whitefield.

Also known as “Lee”, she grew up in Easton and Braintree, MA and was a graduate of Thayer Academy, Braintree and Colby-Sawyer College, New London, NH.

She had been employed by the Southborough School Department, Fenwal Incorporated, Digital Equipment Corporation and several other high tech companies as a senior administrative assistant, executive administrator and project specialist.

Rosalie was a resident of Southborough, MA since 1959 and, with her husband Fred, owned Meadowbrook Farm in Jefferson, NH for over 58 years.

When her children were young, she had been active with the Southborough Cub Scouts and Girl Scouts and volunteered in the Southborough schools. Current interests included genealogy, gardening, knitting, and both American and Swedish history. She enjoyed living in an area rich in American history and particularly enjoyed the South Shore and Plymouth areas and the ocean. Her grandson Cody was a very special joy to her.

No public services will be held at this time.

Donations in lieu of flowers may be made to the Jefferson Historical Society, PO Box 143, Jefferson, NH 03583 or to a charity of one’s choice.