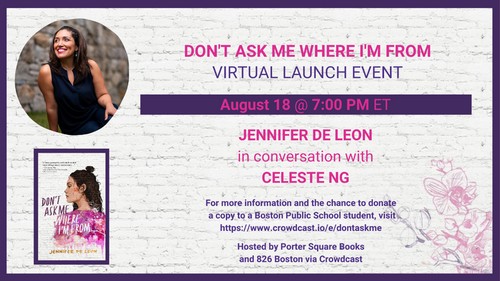 Above: A virtual launch is scheduled for next week.

For a small town, Southborough has a decent number of published authors. The latest I just learned about is young adult novelist Jennifer De Leon.

Southborough Wicked Local interviewed the author of “Don’t Ask Me Where I’m From”. According to the article, the novel was informed by the author’s own experiences in a local high school.

A Framingham High School student in the 1990s, she was often among a handful of people of color in her classes. She would code switch, carrying herself one way in her honors French class and another as a member of the after-school group Latinas en Accion. . .

It’s an experience that resembles that of Liliana Cruz, the 15-year-old hero of her young adult debut novel, “Don’t Ask Me Where I’m From” (Simon & Schuster). Liliana, a half-Guatemalan and half-El Salvadorian student at an inner-city Boston high school, must also balance two worlds when she is accepted into a wealthy and predominantly white high school

she spent a decade teaching in Boston Public Schools. Those years in front of students – from elementary to middle school to high school and college – helped fuel and energize Liliana’s voice, said De Leon.

The book is being published by Simon & Schuster. Promotions share that author of “Little Fires Everywhere”, Celeste Ng called the novel:

Ng will be joining De Leon for the book’s launch event next week.

The book was originally scheduled to launch in May. Like many for book launches during the pandemic, the plans had to be retooled. A virtual book launch is now scheduled for August 18th at 7:00 pm.

As part of the event, host Porter Square Books and co-sponsor 826 Boston are seeking support for donating copies of the book to Boston Public School students. Their goal is to be able to give a copy to to every ninth grade student at O’Bryant High School. You can find more details on that here.

As for the book and author, here is another excerpt from the Wicked Local article:

From the way she walks and talks to now going by “Lili,” she does anything to fit in [at her new school].

But then Liliana finds out the truth about her father: He is undocumented and has been deported back to Guatemala. With her family now in jeopardy and racial tensions reaching a fever pitch at her new high school, she becomes more honest about who she is.

De Leon said she hopes the book can be both a mirror and a window for readers. She wrote it specifically for readers like her younger self: “young Latinx teens, girls in particular.”

“It’s the book I craved as a young person. It’s the book as a teacher I wished I had to pass on to my students,” said De Leon.

Meanwhile, for those who have not had experiences similar to what Liliana is going through, it can “show people who might just see the dominant media narrative of immigration… a different side of the story,” said De Leon.

De Leon is an instructor and board member of the Boston creative writing center GrubStreet. Prior to that, she spent a decade teaching in Boston Public Schools. Those years in front of students – from elementary to middle school to high school and college – helped fuel and energize Liliana’s voice, said De Leon.

Click here for the full article.  The article notes that De Leon is currently a professor at Framingham State University and an instructor and board member of the Boston creative writing center GrubStreet. The book launch website further shares that she is an editor, speaker and creative writing professor and:

She is the editor of Wise Latinas: Writers on Higher Education, the 2015–2016 Writer-in-Residence at the Boston Public Library, and a 2016–2017 City of Boston Artist-in-Residence. She is also the second recipient of the We Need Diverse Books grant.