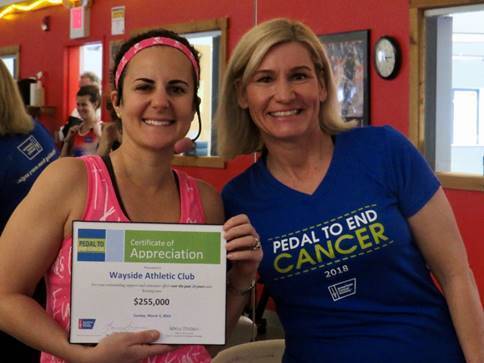 Above: Over the course of 16 years, Southborough’s Nia Benoit has helped raise close to $300,000 for the American Cancer Society. (contributed photo of L-R Benoit with ACS Executive Director Louise Santosuosso)

The American Cancer Society asked me to share their news about a Southborough resident the group honored this summer. According to the press release, Nia Benoit has been coordinating an annual fundraiser in Marlborough for 16 years:

The American Cancer Society recently presented a Sandra C. Labaree Volunteer Values Award to Nia Benoit, a Southborough resident. The award is the most honored accolade by the Society in New England, and it recognizes Benoit’s remarkable accomplishments in support of the Society’s mission to celebrate lives, to save lives and to lead the fight for a world without cancer.

Benoit has coordinated the Pedal To End Cancer indoor cycling fundraiser at Wayside Athletic Club in Marlborough for its entire 16-year history, raising nearly $300,000 during that time. During the March 8, 2020, Pedal To End Cancer event she told participants that she did not know anyone who had cancer when she first organized the event. Since then, there has been a growing list of people who she knows who have been touched by cancer. It shows that work still needs to be done, she said.

“Her compassion and determination go beyond anyone I have ever worked with in my 19 years at ACS,” said Michael Corrigan, coordinator for community support at the Society. “Nia every year makes time to not only organize and recruit for Pedal To End Cancer, but she also adds things to make it different. To meet someone who has lots of other demands on their time, like family and work, and who has stuck with an event from its inception, it’s just so admirable.”

The Sandra C. Labaree Volunteer Values Award is named in honor of the late Sandra C. Labaree, a longtime American Cancer Society volunteer from Maine. Despite her death from breast cancer in 2000, Labaree’s spirit and values live on through this award. Each year, the local area Board selects the most inspired and passionate individuals to receive this prestigious honor whose service best exemplifies the Society’s organizational values of mission, stewardship, diversity, data-driven, and respect.

For more information on how to become a volunteer for the American Cancer Society or about the Society’s programs and services, please visit www.Cancer.org or call 800-227-2345.

About the American Cancer Society

The American Cancer Society is a global grassroots force of 1.5 million volunteers dedicated to saving lives, celebrating lives, and leading the fight for a world without cancer. From breakthrough research to free lodging near treatment, a 24/7/365 live helpline, free rides to treatment, and convening powerful activists to create awareness and impact, the Society is the only organization attacking cancer from every angle. For more information go to www.cancer.org.