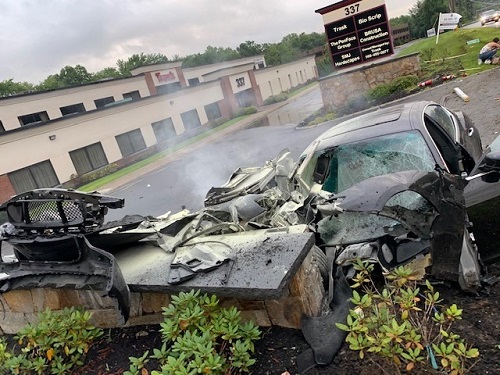 Above: Based on blood test results, the SPD is charging the driver in a serious car accident from earlier this month. (image from Facebook)

The Southborough Police Department is pressing charges against the driver of a car that crashed in early August.

Earlier this month, Wicked Local wrote that a man was injured in a car crash along Route 9 in Southborough. On Friday, the SPD posted an update on Facebook. The information doesn’t update the condition of the passenger, but characterizes the injuries suffered as serious. That makes the charges a felony:

After an investigation by Detective Keith Nichols into the Motor Vehicle crash that occurred on August 2nd, 2020 in front of 337 Turnpike Road, Southborough; it was determined that the operator, [a Hudson resident]* will be charged with OUI Serious Bodily Injury and Negligent Operation of a Motor Vehicle.

[The driver] lost control of the 2014 Maserati Ghibli while traveling westbound on Turnpike Road, and subsequently crashed into a utility pole and rock wall. A search warrant for [The driver’s ] blood showed that [the driver] had a BAC of .124% at the time of the crash. The front passenger in her vehicle sustained serious injuries as a result of the accident, and was transported to the hospital from the scene.

A great job by our Southborough Police Officers and the Southborough Fire Department, as they provided emergency rescue services to a very chaotic accident scene.

In addition to the rock wall the car hit, the original story by Wicked Local noted that the crash also involved a utility pole and required closing a section of route 9 for hours. A new article notes that the case will be heard in Westborough District Court.

*The accused’s name was stripped out under blog policy.