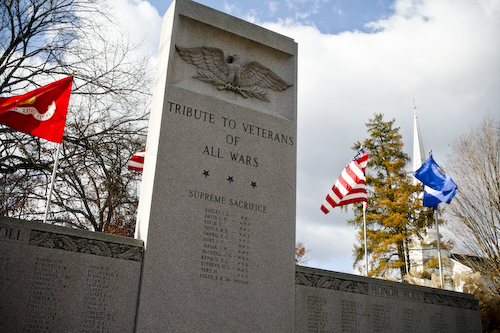 As always, the Town will hold a special parade and ceremony on Veterans Day in honor of current and past service members.

I reached out to VFW Post 3276 Commander Steve Whynot for details on this year’s November 11th ceremony. While there need to be safety observances, the event won’t be as closed off from the public as the Memorial Day ceremonies were. He also shared that next Wednesday’s ceremony will be directly followed by an event to honor Southborough’s late American Legion Commander John Wilson.

As usual, veterans will gather (under social distancing protocols) at the Community House at 10:30 am. State Representative Carolyn Dykema and a representative of the Board of Selectmen will join them. (I don’t have word yet on whether or not Town Scouts will march this year.)

From there, they will march to the All Wars Memorial. Per tradition, the observance with speeches and prayers will take place at 11:00 am (1100 hours on the 11th day of the 11th month).

Although he’s asking the public follow protocols for masks and distancing, Whynot isn’t going to ask people to stay away on Wednesday. Current state guidelines on public outdoor gatherings call for a 50 person cap. Whynot pointed out that doesn’t prohibit additional members of the public from observing the parade from sidewalks or the ceremony at a distance they feel comfortable with.

[Editor’s Note: Under revised state metrics, Southborough was reassessed as a low risk community. Technically, that raises the allowed attendance at an outdoor function to 100 people. (While a look at more recent numbers could have moved us into yellow, the next report won’t be issued until the day after Veterans Day.) The state still calls for people to wear facemasks and maintain 6 feet of distance from people who aren’t from your household.]*

For those not comfortable attending, the ceremony will be recorded by Southborough Access Media. (In addition, anyone is encouraged to stop by the All Wars Memorial earlier or later in the day to pay their own private tribute to veterans.)

the dedication of the Lt. Col. John Wilson Memorial Bench in honor of John’s contributions to his country and his dedication to the Town of Southborough.

As Southborough’s Veteran’s Agent and American Legion Commander, Wilson spearheaded an effort in 2018 to update the All Wars Memorial to list all Southborough veterans who served in the “War on Global Terrorism” since 1990. Last November, the Town recognized Wilson’s role in preserving the Southborough Golf Club by dedicating its access road “John Wilson Drive”. At that time, the flyer for the ceremony also acknowledged Wilson’s longtime services to Southborough as the Town Moderator and Veterans Agent, and as a consummate volunteer and patriot.

The day before those ceremonies, Southborough veterans will be passing out lunches at the Senior Center. The program replaces the traditional Veterans Day luncheon. (That program for members of the Council on Aging is already full. Though, as always, the Senior Center does take names for waitlists in case of cancellations.)

Updated (11/6/20 11:37 am): Commander Whynot commented that I had the wrong date for the Senior Center lunch program. It is on Tuesday, November 10th.

Updated (11/8/20 2:09 pm): On Friday, the state issued new metrics for assessing Community Risk Level. The metrics were in response to criticism that the old method meant that it only took a handful of cases to move a small town from green to red. Under the revised metrics, Southborough is green, and never would have reached red.

Sorry – I misunderstood. Thank you for the correction. I’ll update.

As a medical professional working with covid patients, I understand the importance for recognition to our towns veterans. I feel that to encourage people to attend this observation it in total disregard of peoples healthy and safety. Everyday the number of people infected with covid as well as the number of deaths is on the rise. Shame on the Board of Selectman and town to let this happen. when Southborough numbers are in the red do not be shocked or surprised. When someone you know or a loved one passes away from this horrid virus maybe then you will realize that just because you can have a gather doesn’t mean you should encourage a gathering.

I offer “ speechless” to contact me directly – instead of hiding behind their facade.

If you can’t – Well I guess myself and fellow Veterans did our job to allow “ your opinion”….

According to mass.gov, the 25 person limit applies to outdoor gatherings at private residences. The rules for public venues were different.

The state’s page on gathering requirements summarizes the current situation (with a link to the detailed order) and lists prior orders. The most recent order was issued on November 2nd (two Fridays ago).

Last Friday, the Governor didn’t issue revised guidelines on gatherings. The announcement that day was about the revised assessment of community risk levels. Since it lowered Southborough’s risk to low, that impacted which section of the Nov 2nd gathering order applied to our Town.

You can read the Governor’s announcements here.

I wanted to extend my sincerest THANK YOU to everyone that joined us yesterday for our Veterans Day Observance and Dedication of the LTC John H. Wilson Memorial Bench. As anyone could see – masks and distancing was the order of the day and everyone cooperated. It was truly fantastic to see such a show of support for the Veterans and for the Wilson Family.

Deepest appreciation to the many people who donated – ensuring the Memorial Bench would be completed. I’d like to specially acknowledge McCarthy’s Pool and Falconi Bros. for their generous donation.

On behalf of the Wilson Family – A donation of $2,000 is being made to the USMASS ALS – Paul Cellucci Fund.

I believe the Wilson family was very pleased to see this lasting tribute to a man who so dedicated to his family and Nation and cared and gave so much to this community.

The MIssion was accomplished..