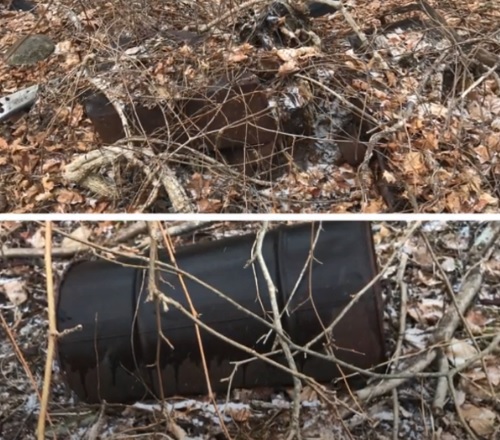 Last fall, a disgruntled Conservation member put a spotlight on an old farm dump on Town owned land. Now, Southborough’s Public Health Director is making recommendations for how the Town should remediate the hazard.

On Monday, Public Health Director Paul Pisinski will ask the Board of Health to support submitting his recommended plan to the Board of Selectmen. If that plan is approved, it would require funding. That means ultimately Town Meeting would be asked to vote on a cleanup plan.

This week, he previewed to selectmen what his recommendation will entail.* It would be to clean and cover up the old Davis Farm dump.

Leading up to Halloween 2019, Conservation member Carl Guyer played on the theme, inviting the public to come meet a “monster” at Breakneck Hill. Hoping to shame the Town into action, Guyer shared footage of the “mess” with a statement to blog readers describing:

While Town officials have been looking into it, Guyer has been publicly pushing for faster action.

This week, Pisinski told selectmen that the site is a public safety hazard that should be dealt with. He described finding broken metal and glass, plus “squishy areas” where debris appears to be covered by leaves. In keeping with Guyer’s description, he said it was in an area difficult to find out in “the jungle”

The Public Health Director noted that he has no reason to believe the dump is a toxic/environmental hazard. When a Licensed Site Professional (LSP) looked at the site for possible contamination, in 2005 he found none leaching at a surface level. Pisinsiki was also able to confirm that testing of nearby wells found no contamination. (That’s consistent with Guyers’ follow up message on the situation last fall.)

Earlier this year, I learned from Guyer that the LSP was also brought back in 2019 and “ran a single spot test” that “luckily found nothing beyond established limits.”

Pisinski did acknowledge this week that he can’t say what 50 years down the road would bring, since he didn’t know what was “way down under the ground”.

He is proposing appointing a committee to oversee remediation of the site. He explained that was how the Town handled closure of the landfill at Parkerville. He noted the cleanup doesn’t have to be as extensive as that closure. He described remediation to be likely clearing off a few feet of debris, leveling the site, covering the area with “decent” soil, and planting something over it (e.g., fescoe.)

Prior to the cleanup, Pisinski believes a survey is warranted to outline where the dump is. He stated that some items appear to have been dumped on abutters’ land, who are purportedly amenable to having it removed. The survey could cost about $14-15K. He also recommends clearing away trees and briar so they can do the work. Then an RFP would be issued for the remaining work.

Selectman Brian Shea opined that it was important to bring in an LSP to guide them on how to handle the issue in an environmentally responsible way. It appears the LSP the Town had been using retired. In August, Danza updated Conservation that she was pursuing finding a new LSP or professional to follow up on the findings of a report from a contractor for the Commission.

Selectmen had approved hiring Lucas Environmental to determine if any wetlands run under the site. On Wednesday night Town Administrator Mark Purple said their final report indicated there may be.

The Conservation Commission has been investigating how to deal with the dump since it came to their attention again in 2019. This summer, Guyer made it clear to the Commission and selectmen that he was unhappy with how long the process was taking. He publicly pushed for action.

In June, Guyer unsuccessfully attempted to have Conservation vote to ask DEP to advise them on how to resolve the dump. The Commission member stated that he believed that the Conservation was neglecting its duties, creating a liability for members. He noted that he almost walked away from the commission at the end of his term to avoid continued responsibility.

When Guyer’s term was up in June, he informed the Board of Selectmen by letter that he would only remain on the Commission if they pledged to take action on cleaning up the dump by January. Selectmen declined to make the pledge, referring to it as a matter of principle. Instead, they noted that they would take whatever appropriate action was determined by experts. In the June discussion, Guyer pointed out to fellow members that selectmen avoided mentioning the dump.

Chair Mark Possemeto rebutted Guyer’s charge of neglect by the Commission. He argued that Guyer just didn’t approve of the path they chose. Guyer characterized the strategy of retesting the site as just telling you “maybe you’re sick” but not providing a cure. Possemato replied that if testing shows “you aren’t sick”, why would you need a cure? Guyer argued that it’s an illegal dump and if something “comes out”of it, he worried they’d be liable. He also noted concern about nearby reservoirs.

Member Ben Smith said he was beginning to side with Guyer, feeling that the Town’s response has been moving at a “glacial pace”. At that time, Danza reminded that they were waiting on Lucas Environmental’s report. She explained that if there were any wetlands going under the area the clean up activity would be different than if they were. The contractor was still waiting for old aerial photos of the area. She referred to a months long delay as due to Covid and not caused by the Town.

Guyer and Smith argued that whether there are wetlands or not, cleanup would still be needed and they would need MassDEP to be involved. Member Russell Gregory said that he was also concerned about the delays and liability. He reminded Carl that he was the one who showed him the site. However, he opined that since the cleanup method needed would be very different depending on the contractor’s final report, it didn’t make sense to contact DEP yet.

Guyer clearly disagreed, posting a video of the discussion he titled “Watch Southborough Conservation Commission do the wrong thing.”

In August, Guyer contacted the Section Chief for MassDEP’s Solid Waste Program directly. He noted the Town’s limited actions in 2005 and 2019, plus that while there were further notes from 2006 Executive Sessions, Town Counsel opposed releasing them. In his message to a representative to MassDEP, Guyer wrote:

having the Conservation Commission responsible for this site while expecting others to comply with Federal, State and Town environmental laws is lets say ackward.

This site has been known by many in Southborough for years and most likely due to the fear of the cost of clean up, it as been ignored.

MassDEP received the e-mail message below and attachments regarding what appears to be an abandoned farm dump at the Breakneck Hill conservation area. There appears to be exposed solid waste in the area. Can the Southborough Board of Health investigate this complaint?

We have been advised by our Town Counsel not to conduct any investigation or to discuss information about this site off Breakneck Hill Road, which is currently owned by the Town of Southborough.

Still, at some subsequent point, there clearly was follow up with DEP. On Wednesday night, Pisinski referred to communications with DEP about how to handle the farm dump.

The LSP made contact with the Solid Waste Division and stated that they did not need to be involved unless a release had occurred or until we are ready to start creating a work plan as they often are involved in the creation of the plan.

At an October 22nd meeting, Danza updated that DEP determined creation of the plan would fall under the jurisdiction of the Board of Health. Responding to Guyer’s request for an update, she mentioned her site walk with Pisinski. She explained that BOH would be responsible for moving cleanup of it forward, though they would work with Conservation.

The Board of Health’s discussion will be during their meeting on Monday, November 9th at 2:00 pm.

Why is the survey so expenseive? I would have expected no more than $5K. How big is this area? It’s difficult to tell from the photos, but it doesn’t look bad. It looks like debris nestled among a bunch of broken limbs and brush. The broken branches and brush growing randomly seems to be most of the probelm given that people aren’t even allowed to walk in the area. Can’t we just haul the unsightly big trash stuff out since it the site appears to be non-toxic? My take-away from the article is more out of control government spending.

Thank you to Mr. Guyer for his continuing efforts to get this situation rectified. He brought it to my attention a few years ago when I was serving on the Conservation Commission. While the area is somewhat isolated due to overgrowth, when members of the CC did a site walk, we discovered various sizes and forms of debris over a fairly large portion of the land. Without digging, it is difficult to know how extensive those materials are (meaning depth). By the age of some of the items, it seems that the dumping had been happening for a fairly long period of time.

If the town cleans up this site then they also have to clean up Killam farm site as well.
That is also on the books to be hazardous materials, barrels and so on, Was also mentioned on this forum.

Forgot about that one. Here’s my coverage from 2014: https://mysouthborough.com/2014/10/09/planning-board-open-space-process-is-a-priority-continuing-questions-on-killam-farms-and-pine-hill/