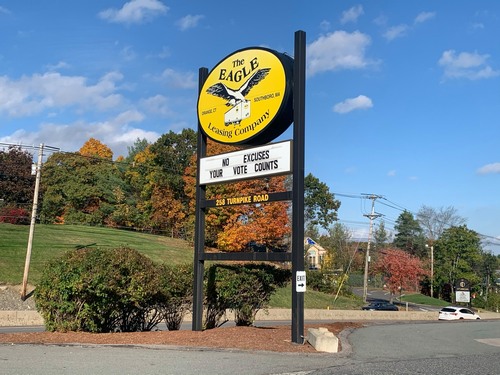 Above: Eagle Leasing has a distinct presence in town, thanks to its marquee sign often sporting a marketing pun or a sincere message like this recent one. The company was covered as an example of how businesses can mitigate risk to employees and their community. (image from Facebook)

Metrowest Daily News covered the success of a state testing program at stopping the spread of Covid-19 at Southborough based Eagle Leasing.

The company credits part of the success to its commitment to pay employees for time spent testing and out of work:

Every two weeks, all Eagle Leasing employees, including members of the Eagle family, are tested for the coronavirus at one of the state’s free Stop The Spread COVID-19 test sites. They get tested on different days, during work hours, at different sites, depending on what is most convenient. . .

Before Eagle learned about the Stop The Spread sites this fall, the company had paid for employees who traveled out of state, showed symptoms of the virus or thought they had been exposed to get tested, an expensive undertaking at roughly $200 a test that wouldn’t have identified workers who didn’t suspect they were carrying the disease that has killed more than 10,000 people statewide.

Eagle Leasing began sending employees to the state’s testing sites in the first week of October. On Nov. 6, the strategy paid off.

While he was at work, one of the company’s employees learned that his latest test was positive. He had shown no signs of illness.

One other employee tested positive in that round of testing, and he is now also in isolation.

Eagle Leasing’s testing protocol stopped the virus from spreading, both within the company and the larger community.

“In this scenario, that asymptomatic person has children, has a family,” Beck said. “His kids are going to school, and him being tested stopped the chain. He has been isolated, and his wife and kids do not have corona.”.  .

While the state now pays for employees’ tests, for Eagle Leasing’s testing strategy to work, the company has to be sure that workers know they will be paid not only for the time they spend getting tested, but for the time they are out of work when a test comes back positive.

In other Covid news, Eagle tweeted about the City of Brockton’s use of their office trailers to hold a large pre-Thanksgiving testing event.

Nice to see. Kudos to Eagle Leasing. Some companies still know how business is done.

I’ve been in town for more than 20 years. David Eagle has always been there for any and all worthwhile causes. It’s no surprise that he’s a caring boss too.