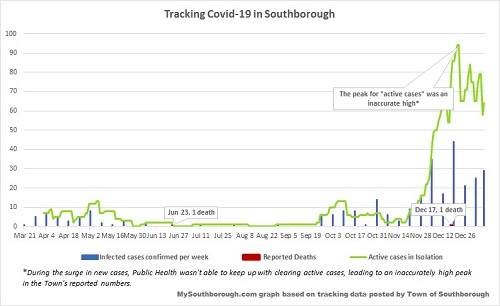 Above: Confirmed cases in a 1-2 week period are down from the December 17th peak. But numbers have been rising again since New Year’s. (click graph to enlarge)

The Town updated it’s Covid-19 page again this morning.* In the weeks following Thanksgiving, confirmed cases had surged to a peak in mid-December. Since then the number of cases per 14 days had been going down. Now, the numbers have started going up again.

As of this morning, 60 cases were confirmed in the past 14 days, 37 of those in the past week.

The Town’s cumulative total over the course of the pandemic is now 291 with 64 cases currently labeled active.**

Two patients have now been reported as having died from Covid-19. The first resident died in late June and the second death was reported on December 17th. (No information has been publicly posted on that resident’s identity.)* All other patients no longer classified as active were released from isolation.

The most recent state report shows the Town’s Average Daily Incidence Rate per 100,000 as 48.0 (higher than the prior report) and the % of tests confirmed positive as 4.36% (lower).

Below are the updated graphs on cumulative cases and age demographics in Southborough:

On Monday and Tuesday, the district offered optional free testing for Algonquin students prior to the resumption of Hybrid in-person attendance today and tomorrow.

*The data is as of January 7th at 9:00 am. To check if figures have been updated since, click here.

**Active Cases: Based on issues that occurred in mid-December, active cases could include patients no longer in isolation when Public Health staff falls behind on the ability to officially clear cases. As for why (conversely) the number of newly confirmed cases can rise at times while the number of active cases in isolation stays low or decreases, that relates to the timing of the infection and symptoms vs. when test results come back. (You can read the explanation from Southborough’s public health nurse in the fall here.)

Updated (1/11/21 11:40 am): I originally referenced the state’s weekly report with status unchanged for the week. It turned out that I was looking at a report for the prior week. The updated report was issued that night.