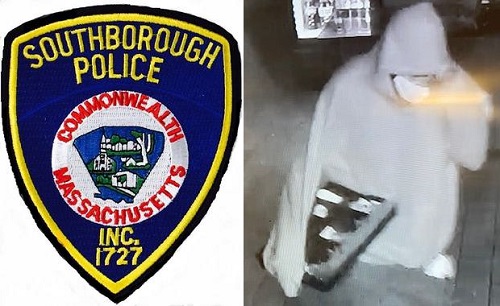 Above: The SPD is looking for information on a break-in at Eros Pizza over a week ago. (surveillance image cropped from Facebook)

On the morning of February 28th, the Southborough Police Department responded to a reported B&E at a Southborough restaurant. Recently, they posted an image from video surveillance.

That’s just one of the SPD highlights from this winter that I’m rounding up in today’s post. Scroll down for those details and other updates.

The 24 pages of activity show the SPD as having made 5 arrests (3 related to alleged driving under the influence). They filed another 8 Criminal Applications, most following vehicle stops. The log lists one report of a past burglary, but only referred to the February 28th B&E as “suspicious activity”.* They also took 27 reports of larceny, forgery, and/or fraud and 6 harassment complaints. And they responded to 72 motor vehicle accidents. 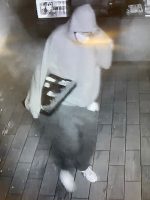 On 02/28/21 at approx. 0637 hrs, Southborough police officers responded to Eros Gourmet Pizza and Deli (located at 162 Cordaville Road) to investigate a report of a B&E to the business. When officers arrived at the business, they observed a smashed front window at that location. Inside the business, officers located a large rock that was used to break the window to gain access. The cash drawer was taken from the business, which contained an undisclosed amount of money. The following image was taken from the surveillance camera footage from inside the business. This incident is currently under investigation. If anyone has an information that can assist with this investigation, please contact Lt. Ryan Newell or Det. Keith Nichols at (508) 485-2121, or at rnewell@southboroughma.com or knichols@southboroughma.com. Thank you.

On Friday, the SPD posted:

***SCAM ALERT***
We have received a few reports about a National Grid (Caller) Scam from a some of our residents. This scam has been around for awhile now, but we feel its always good to remind people that it is out there. We are sharing important information about this particular scam from the National Grid website, and how you can protect yourself (and others).

An important reminder: National Grid will not call your home and demand personal information in order to satisfy an outstanding bill (or threaten to shut off your power if you don’t supply this information).

In January, the SPD posted news of thefts in Shrewsbury to remind residents of the importance of locking their vehicles:

We are sharing this press release from the Shrewsbury Police Department as an important reminder to please lock your motor vehicles and secure valuables in your home. Please share and/or remind your friends, family and neighbors. Thank you.

Following up on questions residents had about a circling helicopter, on January 26th, the SPD posted:

Last night at approximately 5pm, Southborough Police & Fire responded to the reservoir (between Rt. 85 and Middle Rd) to investigate a report of an individual on the ice (near the middle). Police and Fire conducted an extensive search of the reservoir; which included calling in a MSP helicopter from the Massachusetts State Police Air Wing Unit. There were no signs of anyone in the area and emergency personnel did not locate an “breaks” in the ice.

The reporting party saw someone on the ice; and when they turned their vehicle around to drive by again- they reported that the person was no longer in the area. The extensive search was conducted as a precaution.

Home Base No Shave fundraiser

Following up on their November fundraiser, the SPD shared:

No Shave November turned out to be a great success for the Southborough Police Department.

Home Base is a Red Sox Foundation and Massachusetts General Hospital Program, dedicated to healing the invisible wounds of Veterans of all eras; Service Members; Military Families and Families of the Fallen through world-class clinical care, wellness, education and research. Home Base operates the first and largest private-sector clinic in the nation; devoted to providing life-saving clinical care and support for the treatment of the invisible wounds to include post-traumatic stress, traumatic brain injury, anxiety, depression, co-occurring substance use disorder, family relationship challenges and other issues associated with military service.

A big THANK YOU to all who bought a patch and contributed to the success of this fundraiser. We couldn’t have done it without you!!

*Updated (3/9/21 7:25 am): I followed up on why the Eros break-in was logged as suspicious activity, and whether it meant that other B&Es were listed in a way I couldn’t identify. Lt Ryan Newell explained the Feb. 28th log was an error based on the initial call. Police responded to a report of a broken window. Once a B&E was confirmed, the log should have been updated, mistakenly wasn’t, but now has been. He assured that there weren’t any additional B&Es hidden in the logs under other language.