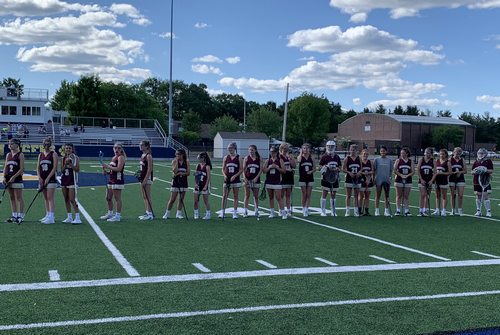 Above: Top seed Girls LAX is one of several teams still vying to become state champs this spring, through a second Central Massachusetts tournament. (image tweeted by @ARHS Athletics)

Algonquin’s last day of school just ended this morning. Yet, for most of their varsity athletes, there’s still more work to do – starting with Boys Lacrosse and Wrestling this evening.

ARHS Boys and Girls Lacrosse teams lost in CMass Championship Finals yesterday. Meanwhile, they’re both headed to “MIAA State Tournament”. To make it even more confusing, the brackets posted are for district sectionals. ARHS Boys Lacrosse will play in the 1st Round this afternoon.

If you’re as puzzled as I was that means you also missed a big announcement earlier this year. It took a surprising amount of digging to find what families with kids on varsity teams this spring already knew. Central Mass athletes have been on two different post-season tournament tracks.

According to the Telegram, the CMass District tournaments that I’ve been following this week were sectionals coordinated by the Central Mass Athletics Directors Association. Their tourney was worked out prior to a public decision by the MIAA* to hold post-season tourneys this spring. (Scroll down for more on that.)

That means that teams that I thought were out, are back in play for a shot at becoming state champs.

Here’s what’s happening so far with ARHS teams in the MIAA tournament.

Boys and Girls Track competed in the MIAA Outdoor Track Central/West D1 Pentathlon at Westfield State yesterday. As I previously covered the Girls won their CMADA tourney. At Thursday’s MIAA meet, the Girls team only ranked 6th of 18 and Boys 14th of 19. But that tournament isn’t over. They still have more events to compete in this Saturday.  (Click here for yesterday’s results and here for the details on events still to come.)

Already based on her performance on Thursday, one senior is slated for All States. Anna Long finished second in the 800 Meter. Coach Patrick Galvin tweeted that her time of 2:17.43 set a new school record.

Today, Friday, June 18th, at 5:00 pm, Wrestling will compete in the MIAA Central Division 2 tourney. The 6th seed team will be wrestling against 3rd seed Hopkinton at Hopkinton.

Also at 5:00 pm tonight, Boys Lacrosse (5th seed) will play West Springfield (12th seed) at home. This is the 1st Round of the Central/West Division 2 tourney. If they win, they’ll play in Quarter Finals on Monday.

The MIAA Division splits may help both Lacrosse teams. Neither of the teams that bested ARHS in the CMADA Finals are in the MIAA Divisions that ARHS is competing in. Grafton beat ARHS Boys 13-5 on Wednesday. Bromfield is the only team to defeat the ARHS Girls all spring, doing it for the third time (17-7) in Wednesday’s CMADA Finals. (Of course, the MIAA brackets also include schools they never faced this year.)

Girls Lacrosse is top seed in Central/West Division 1, earning a BYE on their 1st Round. They’ll play the Quarter Finals at home, date listed as TBD.  (Though, ARHS’ schedule is listing it as Monday at 4:00 pm at home.) Shrewsbury and Wachusetts compete today for the right to take them on.

Also at 4:00 pm on Monday, Baseball heads to Westborough for 1st Round of the Central/West Division 1 tourney. It will be the first time the 12th seed Boys face the 5th seed neighbors this spring. The Boys lost their CMADA Finals to St. Paul’s, which is competing in their MIAA bracket.

At 6:00 pm on Monday, Boys Volleyball will play at Medfield in the Quarter Finals. ARHS won their CMADA Finals but go into the MIAA Central tourney ranked 5th seed vs Medfield’s 4th seed rank.

Boys Tennis is headed straight to the Central Division 1 Semi-Finals, details TBD. St. John’s and Shrewsbury compete this afternoon for the right to play them. The ARHS 2nd seed Boys have already beat both teams earlier this season. The biggest obstacle in their journey to states seems to be their top seed rivals. CMADA Champion Westborough was the only team to beat them this spring (twice).

MIAA is skipping straight to the State tournament for Boys Rugby. ARHS Boys Rugby is in the Division 2 bracket. The undefeated boys head into Semi-Finals this Wednesday against Hanover, a team with a 3-1-0 record. The game is at home, 5:30 pm.**

As for the decision for CMADA to hold their own tournaments, it wasn’t just about uncertainty of how the MIAA would handle this post-season. According to the Telegram’s coverage, the CMADA tourney is billed as a pilot program. The association is reacting to MIAA’s plans to change up how tournaments will be organized starting this fall. It looks like regional tournaments may be eliminated in an attempt to offer a more balanced shot at advancing to state finals.

*MIAA is the Mass Interscholastic Athletic Association traditionally in charge of the high schools’ post-season tournaments.

**Updated (6/21/21 6:54 am): I initially mistated that there is no Boys Rugby MIAA tournament. That’s only true for Girls Rugby. I inserted the Boys team’s info above.