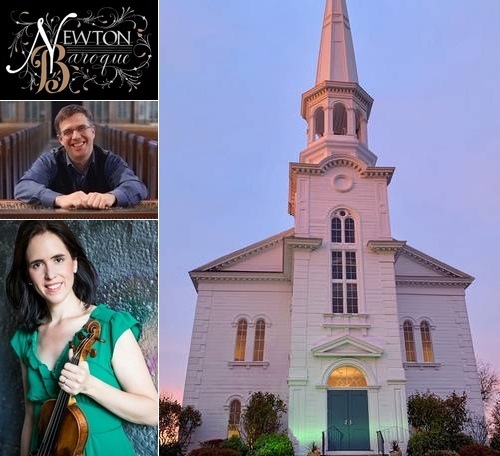 Above: A concert at Pilgrim Church will include a face familiar to the congregation and an acclaimed violinist. (images cropped from Newton Baroque website and Facebook)

This Saturday evening, Pilgrim Congregational Church will host a Newton Baroque concert. The public is invited to attend with an optional donation suggested of $30.

The concert will highlight the violinist, but some residents may be more interested in another member of the orchestra . Pilgrim’s Interim Minister, Andrus Madsen, is a member of Newton Baroque. He will be playing the harpsichord.

The announcement below has more details:

Serenata: A Whole Orchestra in One Violin

Incredible music for violin, viola da gamba, and harpsichord, that pushes the violin to the very limit of possibility. At this concert you will hear Susanna Ogata play as if she were an ensemble of violins, a harp, a hurdy gurdy, a bagpipe, a trumpet, then even two trumpets out of one violin. Additionally, you will hear elegant, joyous, and very poignant music all by the wondrous violinist Johann Jakob Walther

Pilgrim Congregational Church
15 Common St, Southborough
A $30 suggested donation at the door (of course coming for free is also possible).

The Newton Baroque website features more details (and photos) for each of the above mentioned musicians:

Susanna Ogata enjoys an active performance schedule in greater New England and beyond. She has been praised for ‘totally convincing, spontaneous and free-flowing playing” (The Berkshire Review) and her musical “sensitivity and fire” (Boston Musical Intelligencer). Ms. Ogata is dedicated to performance on period instruments and is the Assistant Concertmaster of the Handel and Haydn Society. She has also participated in concerts and appeared as soloist with such groups as the Bach Ensemble led by Joshua Rifkin, Arcadia Players, Newton Baroque, and Blue Hill Bach. She is a founding member of several period instrument chamber ensembles including the Boston Classical Trio, Copley String Quartet, and the Coriolan String Quartet. She has also performed on the Sarasa, Music at Eden’s Edge, Cambridge Society for Early Music, and Boston Early Music Festival series concerts. With fortepianist Ian Watson, her first of four CDs surveying the complete Sonatas for Fortepiano and Violin of Beethoven has been recently released on the CORO label receiving praise for “elegant readings that are attentive to quicksilver changes in dynamics and articulation. Their performance of the Sonata No. 4 in A minor is darkly playful, their “Kreutzer” Sonata brilliant and stormy.” (New York Times) Ms. Ogata’s teachers have included Charles Castleman and Laura Bossert, and she has studied baroque violin with Dana Maiben. She also worked extensively with Malcom Bilson and Paul O’Dette while completing her undergraduate and graduate studies at the Eastman School of Music.

Andrus Madsen is an active performer on the organ, harpsichord clavichord and fortepiano. He resides in Wayland MA, and is the Minister of Music at Second Church in Newton MA. He is the founding director of Newton Baroque and also plays with Exsultemus. He spearheaded a project combining the forces of Newton Baroque and Exsultemus to perform the entire Harmonischer Gottesdienst cantata cycle of Georg Phillip Telemann during the year of 2011. Madsen is also known for his eloquent Baroque style improvisation. He strives to play written repertoire as if he is improvising, while his improvisations often sound as if they had been notated. His recording of keyboard music by Pachelbel, has received significant critical acclaim. “Superb recordings of superb instruments by a musician who deserves to be better-known.” (Michael Barone of pipedreams) This album, played on organ, harpsichord and clavichord is available on Raven CD Recordings.

Laura Jeppesen, viola and viola da gamba, has a master’s degree from Yale University and studied at the Hamburg Hochschule, and at the Brussels Conservatory with Wieland Kuijken. She has been a Woodrow Wilson Designate, a Fulbright Scholar, and a fellow of the Bunting Institute at Harvard. A prominent member of Boston’s early music community, she has long associations with The Boston Museum Trio, Boston Baroque, The Handel and Haydn Society, the Boston Early Music Festival and Aston Magna. In 2015 she was part of the BEMF team that won a Grammy for best opera recording. She has performed as soloist with conductors Christopher Hogwood, Edo deWaart, Seiji Ozawa, Craig Smith, Martin Pearlman, Harry Christophers, Grant Llewellyn, and Bernard Haitink. She has an extensive discography of solo and chamber works, including the gamba sonatas of J.S.Bach, music of Marin Marais, Buxtehude, Rameau, Telemann and Clerambault. She teaches at Boston University, Wellesley College and is a teaching assistant at Harvard University.

Follow the link to the Newton Baroque website (under the photo above) and click on “Media” if you want a preview of the type of music that will be played. Boston is known for its Early Music scene and these musicians are excellent.