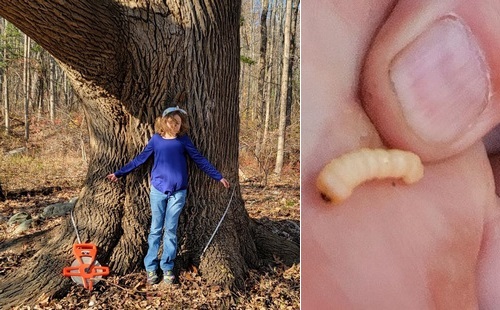 [Ed note: My Southborough accepts signed letters to the editor submitted by Southborough residents. Letters may be emailed to mysouthborough@gmail.com.]

Is this the largest tree in Southborough? This giant ash tree, located near the Pine Hill Meadow, measures 14’4 ¾” in circumference.* It is estimated to be 233 years old meaning that it sprouted the same year that the U.S. Constitution was finally adopted and George Washington was first elected President in 1788.

The Constitution Ash is part of the 26 acres owned and managed by The Pine Hill Meadow Trust, a not-for-profit organization run by residents of the Pine Hill Road neighborhood. Sadly, the Constitution Ash is threatened by the Emerald Ash Borer (EAB), an invasive beetle that has been devastating ash trees in the Mid-West and North-East to the extent that 5 of the 6 ash species are considered “Critically Endangered”, including this white ash (Fraxinus americana).

EAB has been detected only about 200 ft from the Constitution Ash. This is the first sighting in Southborough according to the U.Mass Extension Service. EAB has now been detected in over 200 communities in Massachusetts so it was only a matter of time before it arrived here.

EAB has already killed several large ash trees on the Trust’s property but the Constitution Ash and many others do not appear to have seriously infested yet. The good news is that the pest can be managed by removing some of the infested trees and very targeted use of systemic insecticides on healthy ash trees. Unfortunately, this is expensive. If you would like to help protect the Constitution Ash and the other ash trees on the property, please consider making a tax-deductible donation. Checks should be made payable to The Pine Hill Meadow Trust, Inc. C/O Kathy Cook, 11 Graystone Way, Southborough, Ma. 01772.

For more information on the Emerald Ash Borer:
https://ag.umass.edu/landscape/fact-sheets/emerald-ash-borer

If you have more questions, please feel free to contact me:

As someone who likes math I am embarrassed to admit my math error. The “Constitution Ash” is 14′ 4 3/4″ in circumference not diameter.

I guess I will have to eat some humble pi