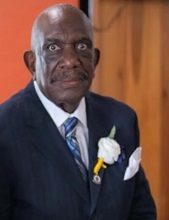 Percy was born in Ensley, Alabama, a son of the late Robert E. and Delia Johnson. He graduated from Parker High School in Birmingham, Alabama and the Culinary Art Institute of America and also attended the University of Michigan. Percy worked as a dietitian and nutritionist for Veterans Administration hospital for over 37 years retiring in 1992. He served his country proudly in the Korean War for the United States Army. Percy was a member of St. Timothy Church in Dayton, Ohio where he served as a church deacon.

Percy is survived by two sons, Donald Lockhart of New York and Dr. Robert E. Johnson and his wife Michelle of Southborough with whom he lived; two grandchildren, Jasmine Jones and Alexander White-Johnson; numerous nieces and nephews. He and his five deceased siblings left a generation of children and grandchildren who possess more than 45 college degrees ranging from bachelors to terminal degrees in law, medicine and academia.

A graveside service with military funeral honors will be held on Monday, December 13, 2021 at Massachusetts National Cemetery in Bourne, MA. MERCADANTE FUNERAL HOME & CHAPEL, 370 Plantation St., Worcester is honored to be assisting the family with arrangements.