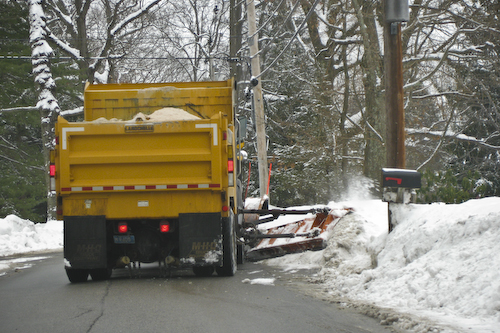 Above: The annual parking bans are in place, allowing plow operators to do their jobs when unexpectedly needed. (Photo by Susan Fitzgerald)

I know that today’s temperatures don’t come with a risk of snow. But, you still won’t be allowed to park on the street overnight.

Southborough’s annual winter parking ban was approved this week. That means through March 15, there is no overnight (midnight to 6:00 am) parking on any public way regardless of the weather.

During snow or ice events, (like the one forecast for Saturday) street parking is also not allowed at any time of day or night. Vehicles violating those rules could be towed at owners expense.

Selectmen approved the seasonal ban at their Tuesday night meeting retroactive as of December 1st. Language was the same as in past years.

It’s worth noting that the notice refers to a bylaw that allows towing of cars on the street during unusual snow/ice storms outside of the specified period. (Which means that if there’s another freak April or October snowstorm, you’re still responsible for moving your car to allow plowing.)

Illegal parking during unusual storms occurring before or after the Ban will be dealt with according to Section 152-6 of the Code of the Town of Southborough which states:
“The Superintendent of Streets, or other officer having charge of the ways, shall be authorized, for the purpose of removing or plowing snow or of removing ice from any way, to remove or cause to be removed to some convenient place, including in such term any public garage, any vehicle interfering with such work, and the liability for the cost of such removal and the storage charges, if any, resulting therefrom shall be upon the owner of such vehicle”.

*The retroactive date isn’t that unusual. I have noticed it in some past years, though not since 2018. I’m not sure why the overnight ban period doesn’t simply get enshrined in the bylaws with the ability for selectmen to extend it or begin it early if necessary.