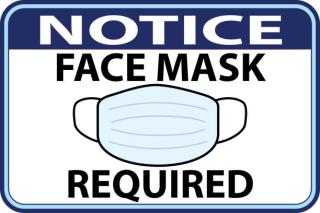 Above: The Town of Northborough issued a Mask Mandate that is effective today. Southborough expects to have one in place by this Thursday. (image from Northborough’s announcement)

Last week, the Board of Health issued a Mask Advisory recommending face coverings in public indoor spaces. This morning, the Board voted to upgrade that to a temporary mandate.

The targeted effective date is this Thursday, January 13th. Stay tuned for the specific language. (It still needs to be approved by Town Counsel before it is publicly issued.)

The draft approved listed exemptions to the mask mandate for those under the age of two (not recommended to wear them due to suffocation risks), those with certain medical conditions, mental health conditions or disabilities (especially anyone who cannot safely unmask without assistance), and those communicating with someone hearing impaired.

The mandate will be in place for at least 30 days. The Board plans to revisit the situation at their February 8th meeting.

Board members discussed the desire to support businesses who would like to require customers to wear masks and can now blame the Town’s mandate.

BOH Member Safdar Medina, who is also the NSBORO District Physician, noted that many residents and students work in town. His major concern is keeping numbers down so the schools can remain open.

Member Nancy Sacco said that while most residents are vaccinated, increased cases among the younger population still raise the risk for elderly and immunocompromised residents who are more susceptible to serious complications.

Public Health Director Dr. Heather Alker agreed with issuing the temporary order. She and Public Health Nurse Taylor West reiterated that the recent high figures in New England are likely far underreported with many infected residents not reporting results of at home tests or not testing at all (especially those with mild or no symptoms). Alker said that given the highly transmissible Omicron variant, even brief indoor exposure puts residents at risk. She offered hope that in about a month the numbers will be coming down.

Sacco suggested that enforcement mandates that come and go based on the situation may be the future if the pandemic is becoming an endemic.

Chair Chelsea Malinowski assured that while the Board is responsible for enforcement, she didn’t expect staff to do that on a day to day basis. Before the vote she asked for feedback from Police Chief Kenneth Paulhus.

Chief Paulhus said he envisioned his officers’ role as mainly educational. However, if a business owner/manager called them in to deal with someone who is causing a problem, in an extreme situation officers could charge someone with trespassing or disorderly conduct. The draft mandate notes that the BOH may rely on the Southborough Police Dept to enforce the rules at time, and there may be a $100 fine for violations.

According to BOH members, Northborough’s mask mandate went into effect today. (Note: Their version is apparently longer, with a more complicated fine structure than Southborough’s.) Westborough enacted one last week.

Once the mandate is issued, the Board will seek to promote the news as widely as possible. Discussed possibilities included using this blog, Facebook groups, the Town’s “codeRed” alerts, the DPW’s electronic roadside board, and the Southborough Fire Department’s sign board.