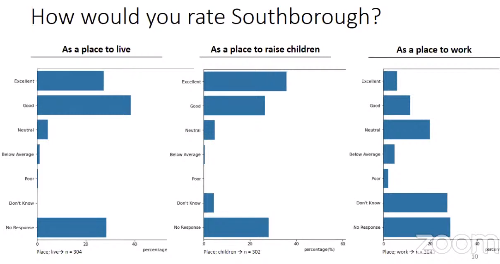 Above: Among the results shared from the 2021 Town Survey is that most respondents perceived Southborough as a good/excellent place to live and/or raise children. Responses were more neutral for “as a place to work”. (image cropped from presentations)*

Last May, the Town of Southborough launched a survey designed to give officials a deeper understanding of residents’ priorities and concerns across the board. Last week, the Board of Selectmen were presented the results.

The only real consensus they seemed to takeaway from the data, so far, was a need to improve survey questions and outreach the next time around.

I’ll share results below, but first some data on whose opinions they represent and selectmen’s response to the results.

About 300 residents provided some feedback, and about 215 completed the 157 question survey. (Apparently, many participants were readers of this blog.) That’s a good result for a Town survey, but didn’t give selectmen confidence views represent the majority of residents.

Self reported demographics indicate that most who responded were white women between the ages of 35-54 and with household incomes over $100K. 98% were residents. My reading of one of the graphs (not included last week)* is that close to 55% indicated they have children under the age of 20.

Although none of the graphs included the data on how participants learned about the survey, presenters indicated that the blog and Facebook were among the most popular sources. That’s also reflected in how participants generally receive Town news:

The presentation was led by residents Maryann and Brian Beauvais who volunteered their services to the Municipal Technology Committee to analyze the data collected. Their recommendations improving participation and completion rates for future surveys.

Their analysis efforts included attempting to give an overview of responses to open feedback questions. BOS Chair Lisa Braccio said she would find it much more helpful to be able to look at the actual comments to help guide her.

Vice Chair Chelsea Malinowski expressed concern about feedback solicited for road project priorities. MTC representatives explained that they reached out to each department and board to ask what they wanted to learn from a Town survey. The prioritization of road projects was the one piece of data that Public Works was interested in public feedback on.

Malinowski opined that those projects should be considered in the scope of all of the Town’s Capital Expense projects. In the future, she would like the Capital Committee to review the survey to make sure that prioritization of and capital expenses is in proper context.

Selectman Marty Healey said the responses reinforced some thoughts that he had, but also gave him food for thought. Member Andrew Dennington said that some of the topics residents raised in the survey from the spring includes issues the Board has been working on over the past few months. He also believed that some of the data could be helpful for the ARPA committee. (That’s the committee that will be studying how the Town should use over $3M in available federal funds through the American Rescue Plan Act.)

Selectmen also asked if there was a way to slice and dice data to understand how opinions and priorities may differ by demographic (like seniors versus families with young children).

MTC’s overall goal for the survey was to help the Town get a better understanding of residents views of improvements needed. That information would help all of the departments and boards, including their committee as they work on what technology improvements are needed to help the Town run more efficiently. Their vision was a survey that residents would become used to completing once or twice per year, with participation growing over time.

It was initially pitched as replacing the need for departments to issue their own surveys. However, some departments have continued to issue surveys for specific needs.

Selectman Sam Stivers supported continuing to pursue the annual survey with some improvements. But he also posited that the groundwork laid by MTC in creating this survey could be leveraged for other surveys based on short term data needs.

Of those who answered the question, over 90% rated Southorough as a good or excellent place to live. The same rating applies for a place raise children, if you eliminate “I don’t know” responses.

A high level overview in an August meeting* summarized that areas that residents showed the highest satisfaction with were:

For some areas with much lower satisfaction ratings, there was no data provided on why residents weren’t more satisfied or what improvements they would like to see. Those include:

Below are images from results presentations. Most of it was included in last week’s presentation or selectmen’s packet:*

*Most of the data and graphs I’m sharing are cropped from a presentation of the results at the Municipal Technology Committee’s August 19th meeting. Not all of those slides were included in the presentation to the BOS on January 4th, but most were. (The versions in the August meeting were generally easier to get clean screenshots of.)

215 people completed a 157 question survey? Are you NUTS?!? Who, in their right mind, is going to spend/waste the time to respond to such an overly lengthy survey?

215 people out of 7638 registered Southborough voters.

Can you say, “insignificant”?

That number of respondents is 0.028 of the registered voters!!!

And now you’ve WASTED time trying to decipher the results of that survey? What’s next, create policy based on those results?

All BOS members should feel both foolish and ashamed to even be discussing the results.
Effectively, NOBODY responded.

Think about it – twenty eight thousandths (0.028) of the registered voters in Southborough responded.

0
Resident
Reply to  Waste of Time

Did you respond? I did and I am not “nobody”.
It took very little time to answer all 157 questions. My town is worth the time I invest in it. Thank you to those who volunteered their time to create, gather and present the results. I think most residents did not know about this survey. Also, it came on the heels of different town department’s survey with some similar questions, which could be an explanation of why so many abandon this one once they had started taking it.

Well over the Town Meeting quorum!

I’m not so sure that 3% isn’t at least somewhat representative from a sampling point of view.
Too long a questionnaire? Maybe.
Meaningless waste of time? I don’t think so.

It’s shocking that only 70% of respondents feel safe in Southborough. I wonder what people are afraid of.

Which is an oxymoron, of course, as well as not being on point at all in a survey about the town. Wink, wink.

I do not think one elected or appointed official will look at this survey as meaningless. The majority of responses fall under “No Response.” This is a license to every town and school official to keep doing what they are doing.

Waste of Time, I find your comments disappointing at best in how you choose to disrespect your fellow residents and neighbors that took the time to take the survey, myself included. Our feedback should have been reviewed and discussed. If you chose to not take the survey that is your choice, but to devalue others that wanted their voice heard I find extremely sad.

0
I didn't know this survey was happening

I didn’t know this survey was even put out last year. I heard about the results recently and would like to have an opportunity to weigh in. Is there a second survey for anyone that didn’t answer the first or a re-do of the first for everyone? We really need better awareness to things of this nature, the town needs to deliver physical fliers with QR codes to the survey link for anything this important to truly weigh in on real topics. If we are doing a once a year survey to truly get a pulse of the town we need to put real effort behind the promotion of that and not just a tweet or blog post update. I don’t have a problem with a long survey, I just need to know about it in the first place and the items the results could influence.

Also, smaller committees and groups can do extra surveys throughout the year, those are fine with digital promotion, but if we do a “pulse of the town” type survey, let’s actually let the town know it’s happening.

The MTC had hoped to make this an annual survey. It’s too late to respond to this version. But I’m sure that the committee would like to hear from residents interested in participating. They did make a concerted effort to publicize the survey – not just a tweet and blog post. The question is, how do they best reach someone like you?