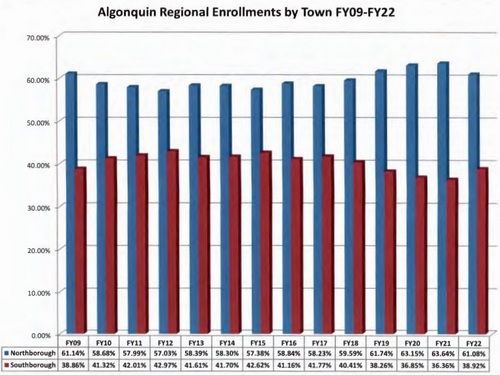 Above: One of the impacts on the budget to be voted on at Annual Town Meeting is the unusual sudden increase in the % of ARHS students that live in Southborough. (image cropped from Select Board packet)

This week the Select Board discussed a revised budget which they forecast will cause a less than 5% increase to average homeowner’s tax bills. Some questions remain about whether to use ARPA funds to further lower cost. They may also use funds to fast track delayed upgrades to the Senior Center without adding to tax burdens.

The Select Board still has to meet with Advisory to discuss final recommendations. And, ultimately, they’ll have to convince Annual Town Meeting voters to support their recommended budgets.

Here are my highlights from the latest discussions on Tuesday night.

The Town’s overall budget, including the schools, isn’t yet final, but getting close. As of this week, Treasurer Brian Ballantine estimated a year over year tax increase of 3.22%.

As I’ve previously covered, shifts in real estate values for commercial and residential properties means that could cause a bigger hike for average home owners’ tax bills.* Ballantine estimated a 4.99% increase if there is a 10% shift. The worst case 12% shift in values could mean a 5.31% tax increase. The Select Board voiced belief that some of the adjustments in process will lower that to under 5%.

One impact on the tax rate will be how the Town decides to use ARPA funds. (Scroll down below school budgets for more on that.)

Shifting real estate values aren’t the only shifts messing with Southborough tax payers. According to Superintendent Gregory Martineau, a population shift is behind a hike in Southborough’s burden for Algonquin’s budget.

Algonquin’s budget is $21,735,261, a 6.7% increase. To reduce the impact to taxpayers, the Regional School Committee applied $600,000 from their Excess and Defficiency funds account this year. That will reduce the increase assessed across Northborough and Southborough to just 3.75%.

Population shifts occasionally happen. But upon questioning, about forecasts for future populations, Martineau noted this year was an “anomaly”.

92% of both Trottier and Melican 8th graders went on to Algonquin. For Southborough, that’s an increase, with only 80-85% enrolling in ARHS in normal years. Meanwhile, it was a dip for Northborough which usually sees 100-101% of Melican’s 8th grade population enroll, as families move into Town. This year, it appeared more families moved out of town.

The administration is still trying to sort out what this means. Only time will tell whether this was a one-time occurrence due to the pandemic and economy or the start of a new trend.

As for Algonquin’s overall budget, it was pitched as “level service” with much of the cost increases driven by contractually driven salary increases. Other cost “drivers” included the need to replace their Health Insurance (since Fallon went out of businesses), special education costs, and resuming their payments towards OPEB.** (Below are pie charts presented for both budgets.)

[To be clear, the budgets above were incorporated into the Town’s financial forecasts.]

The schools do have two special Articles on the Annual Town Meeting Warrant. While they relate to projects that will have eventual costs, they won’t add to FY23 year’s tax burdens. (Or not by much.)

Article 17 seeks authority to borrow $950K for Feasibility Study for a building project related to Neary School. The cost would be bonded over 10 years with only an interest payment due in the first fiscal year.

The Town may receive a grant to reimburse part of the cost. (As of Tuesday night, the NSBORO administration was still waiting to hear from the Mass School Building Authority.) The Article doesn’t specify how much of that may be paid by MSBA if it comes through at all. It does state ” the amount of borrowing authorized pursuant to this vote shall be reduced by any grant amount set forth in the Feasibility Study Agreement that may be executed between the Town of Southborough and the MSBA”.

If MSBA doesn’t support a project, or the reimbursement rate is too low, there may be a decision to pull the Article. However, the Town may also decide to pitch voters that the project is worth pursuing instead of holding off in hopes of MSBA support in a future year. Either way, voters should have a much better understanding of the long term cost before Town Meeting.

Article 31 is to authorize creating a Stabilization Fund for Algonquin capital expenses. The Article doesn’t include allocating any funding towards it this year. In future years, money would be allocated from the Regional School budget to prepare for  capital expense projects on the horizon. That way they wouldn’t add significantly to the budget in a single year.

Use of ARPA Funds

A memo from the ARPA Committee to the Select Board recommended applying $500K of federal funds towards lowering the Town budget. That’s about 1⁄6 of the $3.05M American Rescue Plan Act funds the Town is entitled to. The committee’s vote was with a “target of limiting the tax rate increase to less than 5% for FY 2023”. $400K of the funds would be used for road projects.

Vice Chair Chelsea Malinowski disagreed with the recommendation. She noted that the rationale was based on outdated information, since SB members now believe taxes will be lower than 5%. Malinowski was in the camp of SB members who assert that ARPA funds should only be applied to “one time” expenses in the budget, to avoid a larger year over year budget increase in the future.

Malinowski qualified that she could be convinced to use ARPA money on roads if it would allow taxpayer savings over the long term. (If the DPW Director comes up with a plan for fast tracking projects slated for future years to be combined into a larger RFP, providing economies of scale.) Otherwise, she cautioned that FY23 is a “light” year for capital expense projects, so applying ARPA funds towards that would cause future issues.

Member Marty Healey had a different take. He opined that if they “cross the Rubicon” by applying ARPA funds towards lowering taxes this year, money is “fungible”. Whether the expense it is applied to is one time or recurring doesn’t matter that much.

Healey recommended splitting ARPA funds into three close to equal buckets. The first would be applied towards lowering the tax rate, and that would be over multiple years to ease future shocks. He wasn’t certain how much should be spent this year. He conceived it might be as low as $750K.

The second bucket would be to tackle capital expenses that they see coming and know will have to be paid for. The third would be used for something the Town really needs and wants (perhaps not urgently), but normally wouldn’t be able to budget within the next 5-10 years. They could spend about $1M without increasing tax burdens.

Fellow members expressed some support for that vision, though the amount that should be used in each bucket, and what each bucket would entail are still in question. Some of that will depend on continuing work of the ARPA Committee.

The Board agreed to support the committee’s request for $400-800 for a mailing campaign to seek public feedback on ARPA use. (The committee will discuss the mailer and a survey in their meeting tonight.)

Meanwhile, the Select Board is already planning to allocate close to $160K for budget and capital expenses in this year’s budgets. Those are $50K for the Board of Health, $50K for needed ADA improvements, and $59,515 for Breakneck Hill remediation. There was less support for applying it towards a $95K DPW truck, though it’s not completely off the table.

The Board will also consider using funds to pay for long awaited renovations to the Senior Center. Chair Lisa Braccio roughly estimated that at around $300-$350K. She confirmed that the project for Cordaville Hall would be a “bridge” until a larger municipal building project can be pursued. Anything resulting from changes to Woodward and Neary would be years down the road. Earlier, member Sam Stivers supported fast-tracking the project. He noted that the longer they wait, the less value the project will have. He’d like to see them get more years out of it.

Upon questioning by member Andrew Dennington, Braccio assured it was below the threshold to trigger larger building compliance expenses. And she explained that the Facilities Director believes that waiting until Assabet would be able to take on a project would lead to increased materials expenses that would cancel out savings. (Pursuing a project by Assabet students was the hope prior to the pandemic.)

They will seek updated details on the proposed renovation/addition to be presented at their March 15th meeting.

*This refers to the potential increased difference between total assessed values of Southborough’s Commercial properties and Residential property values. You can read more detail about that issue in my November post about the impact of the changing real estate valuations on tax bills.

**OPEB is “Other Post-Employment Benefits” for future retirees, including life insurance premiums, healthcare premiums, and any deferred-compensation arrangements. Historically, Towns didn’t budget for the eventual costs for municipal and school employees. Since 2004, the federal government has been pushing municipalities to begin putting aside funds for the future liability. You can read more about that in a 2013 post.

Updated (3/3/22 2:25 pm): Somehow this story was accidentally backdated it, so that it never got “top billing” on the blog. (It should have posted at 10:45 am, but showed up as a story posted yesterday evening.) So, I’ve “rescheduled it” for this afternoon so that it isn’t buried under other stories.