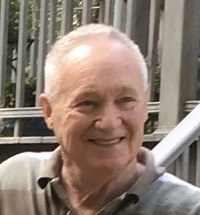 Russell A. Horne, 77, of Marlborough formerly of Framingham died Thursday September 1, 2022 following a lengthy illness. Born in Ludlow, he was the son of the late Bertram & Roberta (Russell) Horne, and the loving husband for 55 years to Doreen J. (Tosches) Horne.

Russell was raised and educated in Springfield, and was a graduate of Springfield Trade High School. He enlisted in the Army shortly after, and was stationed at the Natick Labs. There he met Doreen, they married and settled in Framingham to raise their family. After the Army he worked as an HVAC engineer, and eventually enjoyed a long career as the Maintenance Supervisor for the Framingham Housing Authority.

An avid storyteller, Russell loved history and was heavily involved in the Southborough Historical Society. He enjoyed genealogy and traced the Horne lineage back to the 1400’s. He was a jack of all trades, and renovated his home on his own. He was a member of the Buffalo Soldiers, and loved the game of soccer, coaching many youth teams over the years.

Besides his wife Doreen, Russell is survived by his children, Stacey of Framingham, Kenneth & his wife Sandra of Framingham, and Deana Miller & her husband Robert of Marlborough, his grandchildren, Michaela Horne, and Jaiden and Dylan Miller, his siblings, Bruce, Ronald and Richard, and many nieces and nephews.

Family and friends will honor and remember Russell’s life by gathering for visiting hours in the McCarthy, McKinney & Lawler Funeral Home, 11 Lincoln St. Framingham on Sunday, September 11th from 1-4PM. His Funeral Services will take place in the funeral home on Monday morning at 10 o’clock. Interment will follow in St. Tarcisius Cemetery, Framingham.

In lieu of flowers, remembrances may be made in Russell’s name to: UMass Memorial Cancer Center at Marlborough Hospital, 157 Union St. Marlborough, MA 01752.