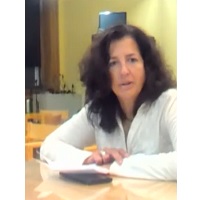 Above: The DPW head gave her notice on Tuesday night. (image cropped from remote meeting video)

The public announcement was made in the final moments of this week’s Select Board meeting. During Public Comment, Galligan said she was providing the required 60 days notice.

The DPW head told the Board that she appreciates the opportunity she’s had, including working with former Superintendent John Boland who hired her.

Galligan has worked for the Town for around 22 years and in her current role for more than 16.

According to a 2006 article by the Boston Globe, Galligan was hired as a staff engineer about 6 years prior. She took over as acting Superintendent when Boland left on medical leave in August of 2005. (He later resigned that October.) She was officially promoted in April of 2006.

On Tuesday night, Galligan told the Board that she had great department heads and a great team of people down oat the DPW. She followed:

At this point, I am deciding, Life’s short and there are no guarantees. And if I don’t do something and pursue a new passion that I have now, I might not have that opportunity.

Over the years, Galligan has been the subject of a lot of public criticism (many through comments on this blog) over a variety of issues.

Prior to the renewal of her contract in June, some members of the public pushed the Select Board not to approve her three year contract with a raise. The contract was approved, but the Board stated that it included that future raises would be based on performance reviews which would include the Board’s input.