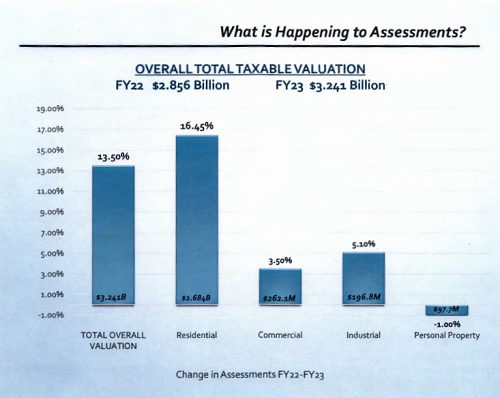 Last week, the Select Board agreed to approve a single tax classification, which will cause an average 5.58% tax increase for residents. That’s much larger than officials predicted in the spring.

Based on last week’s decision, the property tax rate has been set at $14.76 per thousand of the total assessed value.

The rate is a 9.34% decrease from last year. But, given the 16.44% spike in residential real estate values, most homeowners’ bills will show an increase. The actual impact will vary by home.

While residents will see an increase in their taxes, businesses in Southborough should see a decrease. The Assessor’s report to the Select Board showed an average decrease of 5.64% for Commercial/Industrial, Mixed-Use tax bills.

Below is more of the assessment data Asssessor Paul Cibelli shared with the Select Board:

Although the Online Property Cards have yet to be updated, the Assessors Office has posted the property values (for both real estate and personal property) that 2023 taxes will be based on. You can find the updated valuations here.

I cherry picked a few properties to compare their tax increases over the past couple of years and found it could vary dramatically.

I reached out to Cibelli to ask what residents should do if they believe their home was overvalued in recent assessments. The answer is to file a Tax Abatement request. Property owners have until 5:00 pm on February 1st to file an application. (You can find the application and instructions here.)

During the hearing, Cibelli also noted that seniors can defer taxes “for 2%”. I looked that up and found state guidance here that explains:

Under Clause 41A, seniors may also be able to delay payment of their property taxes. A property tax deferral does not discharge the tax obligation like an exemption. Instead, it defers payment until the senior sells the property or passes away. A deferral allows seniors to use resources that would go to pay taxes to defray living expenses instead. Taxpayers who qualify for personal exemptions under other clauses in M.G.L. c. 59, § 5 (for example, for seniors, disabled veterans, blind persons or surviving spouses) may defer all or part of the balance of their reduced taxes.

You can find the Town’s information on exemptions and deferrals here.

Given the increase in residential bills and decrease in commercial bills, why did the Select Board and Assessors continue to support a single rate?

In the hearing, Cibelli again demonstrated that based on the outsized percentage of residential vs commercial properties, creating a small savings for residents would require a large increase for businesses. He calculated that splitting tax rates by 5% to set the residential rate at $14.61 and the commercial rate at $15.50 would translate to saving the average single family home owner $121 but costing the average “C & I Improved Property”* owner an extra $2,422.

Looking alternatively at the median value, A homeowner whose property is valued at $730,800 would save $110 under the split rate model, while a business with an improved property would see a $702 increase.

This time around, the full board was supportive of continuing with a single rate. In the past, and even earlier this fall, Select Board Member Sam Stivers had indicated interest in considering a split rate. During the hearing, Stivers said this wasn’t the time for it.

Select Board Chair Kathy Cook noted that the public schools drive a large part of the budget, which businesses don’t add to the cost of. Member Lisa Braccio pointed out that other towns with split rates offer amenities to businesses that Southborough doesn’t have, like sewer systems.

Resident Carl Guyer attempted to sway the Select Board to pursue a split tax rate. Guyer claimed that businesses with sewer generally pay for that amenity on top of the property taxes.

Rob Anderson, who serves on the Economic Development Committee, thanked the Board for supporting the single rate. He argued that you can’t claim to be business friendly if you shift the tax burden to businesses in town.

Resident Patricia Fiore asked to discuss the other exemptions that Cibelli had recommended against. The Residential exemption would provide a discount to homes occupied by resident owners. An offset increase in the taxes would be shifted to other residential bills. Cibelli had noted that the exemption is primarily used in communities with a large number of vacation properties.

Fiore pointed to the savings that Cibelli’s graph said would be seen by residents with homes below the average value of $803,500. She said those would be more likely owned by seniors and people with lower incomes in town. She opined that residents who chose larger, more expensive homes should be willing to take on more of the burden.

Stivers said he was surprised by the number of retired residents who have described themselves to him as being house poor. They live in a fairly expensive home but feel a lot more pressure now that they aren’t receiving the same income. He followed that he would need to see data demonstrating a link between the lower valued homes and seniors on fixed incomes before voting to pursue an exemption.

Cibelli noted that seniors can defer taxes. He also spoke about efforts in the state to pursue relief that is tied to the “circuit breaker”. The Assessor noted that the state association had worked on a bill that the legislature made changes to, so even the association no longer supports it. But he said it was worth keeping an eye on developments. Cook explained for Fiore that the Circuit Breaker is a credit on state income tax that is triggered if your income tax and utility payments exceed a percentage of your income.

Another potential exemption that Cibelli had recommended against was the small commercial exemption. The presentation notes that the savings go to the property owner, which isn’t necessarily the business owner. You can view the full presentation here.

*I asked Cibelli to explain the CIIP (C & I Improved Property) label, since it doesn’t reflect the label used in other references in the presentation to Commercial property. He explained that it refers to commercially zoned land with a building on it. He used that a more comparable metric to measure against single family homes than including vacant lots.

Something you need to keep in mind when thinking about real estate tax rates in Southborough is, in 2022, residents paid a real estate tax rate higher than the rate paid on 88% of the residential property in the state while commercial property owners paid a rate that was lower than the rate paid on 75% of the commercial property in the state. This is a baseline view of tax rates in Southborough which does not surface during the annual tax rate setting process.  What is presented by the Board of Assessors each year is always an incremental view ignoring the baseline condition. If incremental changes in our tax policy are not going to be allowed as a means of addressing the misalignment of our baseline condition, our present condition will just continue. The only external consideration is a brief review of some tax rates in neighboring communities followed by statements such as it is obvious we need to remain a single rate community. In some science fiction movies the jump to light speed takes longer.
Here is an interesting example of a self fulfilling bit of analysis. When presenting the impact of a split tax rate, the Board of Assessors put forward what they call a 5% split scenario. After presenting their analysis they are shocked to see it increases the commercial tax rate by 5%. Rather funny.  What would they think if they knew that for the 80% of the commercial property in the state taxed using a split rate if the average split in their terminology is 91%.  Would the adjective “apoplectic” be appropriate here ?
I don’t believe anyone on the Board of Assessors or the Select Board gave much thought to trying to temper the sudden shift in tax burden due to new appraisals by adjusting the tax rates to lessen the impact in the short term. It could have been done, things could have been bettor for residents.

Carl, can you make your argument with comparable towns, both with our neighbors and with other small towns around the state that have a similar mix of values and property types? That would be more convincing to me, because using statewide data includes a lot of municipalities that don’t shed light on Southborough. For example, statewide data includes Cambridge, which has a split rate and quite low rates for residents. But Southborough can’t learn much from Cambridge, which has business attractions that we don’t have and will never have. I suspect Boston is similar. Do cities’ massive contributions to the statewide data swamp more relevant data?

As a former manufacturing engineer I am familiar with this type of argument. If you don’t like the results, try to eliminate the data not favorable to your wishes. That is fine, if you want to eliminate these communities, you need to balance your argument by cutting out the other data points on the opposite end of the spectrum. Say good bye to most single rate cities and towns. If you do that to the data from Massachusetts your result is a population of split rate communities. So now your data set is almost all split rate cities and towns making the argument we should be a split rate community even stronger. We are more like a split rate community than you believe.

I hope, when you were an expert, that you narrowed your data to what was relevant. You haven’t done so on this topic. You’ve asserted it, so show your work! Cambridge and Boston are irrelevant to our choice. So are Mt. Washington and Gosnold. Maybe manufacturing many, many objects that are very similar to each other is not that transferable to analysis of municipalities that have relevant measurable aspects that are many standard deviations apart.
Local towns are more relevant than distant towns, because adjacency to customers matters to businesses that might locate in Southborough. But distant towns that face a similar dilemma to Southborough’s could be informative, too, especially if they’ve made a change between single and split rates and the effects of the change might be teased out.
I could be convinced in favor of a split rate, but you have failed to make a convincing argument.

Hello Kelly
I was never an advocate of narrowing or trimming data. You get into trouble doing that. Usually others want to eliminate data they feel is not relevant, so I would challenge them by pointing out the need to eliminate equivalent data on both sides of the data set. As in this case, it points out the problem with doing that.
FYI : If you rank order all the communities in Massachusetts by the % of their tax base is commercial & industrial, in 2022, Southborough comes in at 86th highest out of 351 communities. We are more urban than most would think.
Thanks for your interest.

Carl, you chose the scope of your data. Narrowing of data to what’s relevant is always required in any empirical analysis.

I am shocked that the Southborough Selectboard would vote on taxes that seem (based on the information) to give a large tax break to developers and commercial real estate developers/management companies over homeowners. Certainly, the great roads and sidewalks can help explain why our taxes are so much higher than many other Massachusetts communities.