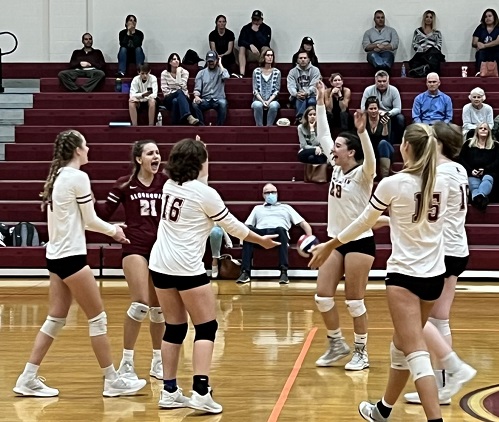 Above: Last night, ARHS Volleyball earned a shot at the Central Mass title. (image cropped from tweet by @ARHSAthletics)

Algonquin Girls Volleyball beat Nashoba 3-0 in the Central Mass Athletic Directors Assoc tournament. The Titans move on to play in the Finals at home this weekend.

The 2nd seed team will take on either top seed Shrewsbury or 4th seed Wachusett. (Those teams face off tonight.) The game is at 4:00 pm on Saturday, October 29th. (Tickets are $3/student/seniors; $5/adult.)

As I previously posted, Girls Soccer will play in its CMADA Semi-Finals on Saturday. (You can find those details here.)

The other two Titans teams in the tourneys fell out at the Quarter Finals yesterday. Field Hockey lost to Nashoba 1-4 and Boys Soccer to Shrewsbury 1-3.

They’re out of the running for a Central Mass title, but still continuing to play losing teams in the CMADA brackets. In both cases, they’ll be playing Doherty this Friday afternoon. Field Hockey will compete at 3:45 pm and Boys Soccer at 4:00 pm.