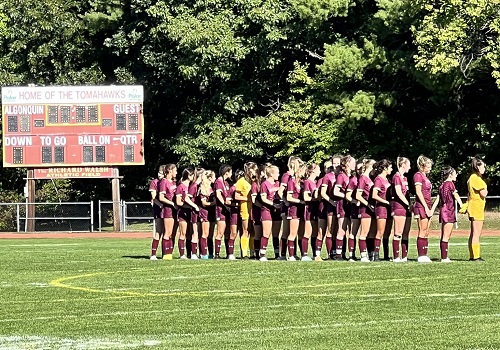 One of Algonquin’s strongest teams this fall is still moving up in the state playoffs. I also have schedule updates for other Titan teams competing this week.

In recent coverage of the strongest contenders in our region heading into the state playoffs, the Telegram wrote:

The Titans also have an advantage on the sidelines in the form of coach John Frederick, who coached the Algonquin boys’ team to Division 1 state titles in 2004 and ’05, and a state final appearance in 2006. Frederick, who teaches at Algonquin, served as an assistant on the Holy Cross men’s team and coached in the New England Revolution Academy before returning to the high school ranks this year.

The Titans will hit the home field again tomorrow evening. As the 4th seed team, Gonk was certain of that advantage for the opening rounds. This week, top seed Acton-Boxborough was knocked out of the running by underdogs Newton North. That means, if the Titans keep beating lower seed challengers, they won’t face a higher seed team until at least the Finals. (Then again, the 32nd seed team’s win highlights the unpredictability of the brackets.)

This Thursday at 6:00 pm, the Titans will host 13th seed Framingham. (If they prevail again, look for news on Friday about Saturday’s Round of 8 game.)

Tickets for Algonquin playoff games must be pre-purchased online here. The school has shared more warnings about how to handle the online tickets:

Please do not redeem your ticket – we will do this at the game. No screen shots of the tickets – send the tickets to your phone.

Cross Country D1 state championship tournaments in Wrentham have been moved up from Saturday to this Friday due to the weather. Algonquin’s teams are part of “Wave B”. The Girls will run at 10:00 am and the Boys at 10:45 am.

Speaking of . . . Cheer is asking fans to come cheer them on at their CMass Finals this Sunday, hosted by Shrewsbury. The Titans will perform at 11:20 am. Tickets for that event should be purchased here. (Doors open at 9:45 am for the competition which starts at 10:00 am.)

As I previously posted, Football is traveling to North Middlesex tomorrow for a non-playoff game at 7:00 pm.