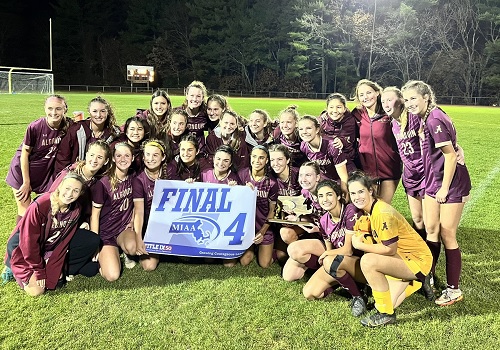 Above: ARHS is sending a team to the Division 1 “Final Four” this week. (image cropped from tweet by @ARHSAthletics)

Since I last updated on Algonquin sports, Girls Soccer scored its way into the State Semi-Finals and Boys Cross Country earned a team spot at All States.

Titans Girls Soccer beat Newton South 3-0 in the D1 Round of 8 on Saturday. The Telegram recapped:

Kate DiTullio, Maddie Faucher and Katie Richmond had the goals, and Keely Scott (3 saves) posted her 13th shutout of the season as the host Titans (15-1-6) advanced to the Division 1 Final Four.

For the Final Four game, the 4th seed team will again face a lower seed challenger. But for the first time in the tourneys, they won’t be playing at home.

The Titans will travel to Walpole on Wednesday to play 9th seed Wellesley at 6:00 pm. Tickets must be pre-purchased online. (As of writing this story, they weren’t yet available, but will be sold here.)

Gonk Cross Country competed at their State championships on Friday. The Boys team earned 6th place in Division 1B, paving their way to compete at this weekend’s All States at Fort Devon. The Girls came in 11th place. The teams were led by Aiden Ruiz who finished 27th and Olivia Guckian who finished 38th. Guckian earned the right to race as an individual. (You can find more highlights in the Telegram and the full results here.)

ARHS Cheer competed at the CMass Finals on Sunday. They tweeted a Reel of their performance (see below).

Check out our regionals performance! https://t.co/1bMcdUJ6hR

The team didn’t automatically qualify for this weekend’s Cheer State Championship. But stay tuned, since they still have a shot at an “At Large” bid.