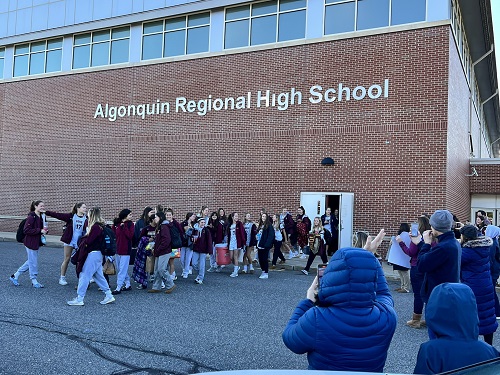 Above: A group of Friends, family, and fans of Titans Girls Soccer rallied to cheer them on as they headed off to the State Championship Finals. (image from tweet by @ARHSAthletics)

Aside from the annual Turkey Day game, Algonquin fall sports came to a close on Saturday.

Although they didn’t come home with Championship titles, two Titans teams can boast having made it all the way to the Final Division 1 competitions.

For the first stime since 2015, ARHS Girls Soccer made it to the State Finals. The Gonk team faced off with upper seed Hingham — the same school that knocked them out of last year’s brackets in the Round of 8.

The Community Advocate covered the team’s sendoff from the school prior to the big game and the team’s subsequent 1-0 loss:

Algonquin launched a strong attack in second half, and led in time of possession, but despite numerous opportunities including several corner kicks in the closing minutes, the ball was never able to find the net.

“A win would’ve been great but I couldn’t be prouder of all of these girls,” Algonquin senior captain Mia Lochhead said. “We played our hearts out on the field, we were able to connect the way we wanted but – in the end – the ball didn’t go in the back of the net.

“This team is such a family and I’m so proud and thankful that I was able to be a part of it.”

Algonquin finishes its season with a 16-2-6 record and with its first state championship appearance since 2015. As the group wrapped up its final postgame meeting with Frederick, tears of sadness were traded for hugs of happiness.

The Titans then reminisced about how fun this fall has been.

In other sports. . . Saturday was also a big day for ARHS Boys Cross Country which came in 18th place at D1 All States. You can see the full results for the Boys here (led by Joe Lamburn in 69th place) and the Girls here (where the sole ARHS Girls Runner, Olivia Guckian, came in 100th.)

The Algonquin v Westborough Thanksgiving Football game is on Algonquin’s turf this Thursday at 10:00 am. Tickets on game day are $10. Early Bird tickets are available for half price through Wednesday in the Athletics office.

Winter sports is about to kickoff. The Athletics Dept will be hosting Winter Sports Night tonight at the school: “All team candidates and at least one parent/guardian should present at 6:30pm to meet with your coaches.”