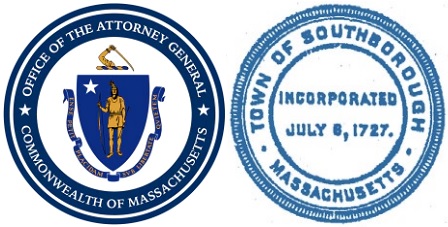 Above: The Attorney General’s office issued a decision to approve a revised version of a new Southborough Town bylaw.

The Attorney General has approved a revised version of the PILOT Committee bylaw voters passed at the May Annual Town Meeting. The AG’s office determined that as originally written, two sections within the bylaw would have unlawfully impinged on the Select Board’s executive authority.

The AG’s office struck language that would have allowed the committee to directly speak with the non-profits in hopes of negotiating a PILOT agreement. It still allowed language that instructs the Select Board to appoint a committee to conduct research to support the Town’s efforts to pursue PILOT agreements. But that’s only if the Board follows through on seating the committee.

The 2019 Article was a non-binding measure to pressure the Select Board to change its strategy and more aggressively pursue financial commitments from the private schools that own a large amount of land in town but don’t pay property taxes (Fay School, St. Mark’s School, and New England Center for Children.) Although each entity has been making Payments in Lieu of Taxes, petitioners argued that the amounts should be larger and more consistent.

This spring, petitioners (led by Patricia Burns Fiore) told Town Meeting they were dissatisfied with agreements made by Select Board Member Marty Healey behind closed doors. (The Board in opposition referred to payments Healey secured as a success.)  Fiore’s new article was an attempt to change the bylaws and ensure that a Committee would actually be seated this time. It included the following language:

if the Select Board is not able, or chooses not, to properly establish such a committee within 45 days of the Attorney General’s approval of this article, another elected Town Official or elected Town Board may accept responsibility for, and organize, such Standing Committee.

The AG’s office deleted the language asserting that it conflicts with “the power of the Selectboard under state law” and “is also impermissibly vague”.

The AG’s notified the Town of the bylaw approval on November 23rd. No mention was made at this week’s Select Board Meeting.

If the Select Board does ultimately choose to seat the committee, the bylaw only authorizes it to research the payment issue. Although the Select Board has the authority to include anyone it wants in discussions with non-profits, the committee wouldn’t be entitled to be included in conversations. The AG’s office struck the following bullet from the charge:

Engage in discussions with non-profit entities owning real property in Southborough valued in toto more than six million dollars, with the objective of establishing formal agreements through which these entities contribute reasonable annual PILOT (Payment in Lieu of Taxes) amounts to cover the Town’s cost of providing services for them, their staff/employees, for their students, and for others associated with their activities in the Town.

The decision issued by the AG’s Director of the Municipal Law Unit, Margaret J. Hurley, explains:

We note that our partial disapproval implies no agreement or disagreement with any policy views that may have led to the passage of the bylaw amendments. The Attorney General’s limited
standard of review requires her to approve or disapprove by-laws based solely on their consistency with state law, not on any policy views she may have on the subject matter or wisdom of the by-law

Apparently, on November 29th, the Town Clerk’s Office posted a notice to the Town website (under the tab for Town Meeting), and in 4 public locations specified in Town bylaws. That notice explains the changes and states:

Claims of invalidity by reason of any defect in the procedure of adoption or amendment may only be made within ninety days of the posting of this notice.

The version of the Article approved adds the following language to the Town’s bylaws:

At the ATM in May, Moderator Paul Cimino warned voters that the AG’s office might either reject or revise the Article. He explained that unlike Articles proposed by Town officials, the petition articles aren’t subjected to review by Town Counsel, and the wording couldn’t be altered even if it was.

There was one amendment made on the floor for legal reasons. The initial Article called for appointing an Advisory Committee member instead of a Select Board member. (In fact, Select Board members were specified to be excluded from serving.) That would have run afoul of the bylaw governing Advisory. Fiore submitted an amendment, approved by voters, to replace that language with the bullet including a Select Board member.

The AG’s ruling took longer than usual. At the September 7th Select Board meeting, Town Administrator Mark Purple informed the Board that the other bylaw changes from Town Meeting had been approved. He said the AG’s office asked to speak with Town Counsel to request an extension on the PILOT Committee ruling.

You can read the final decision with the legal reasoning here.

As for a better understanding of why petitioners asked voters to approve the Article, I’ll point interested readers to Fiore’s presentation at Town Meeting. (For some reason, technical issues prevent YouTube links from working within my posts. But embedded videos do work, so I’m inserting that below.)