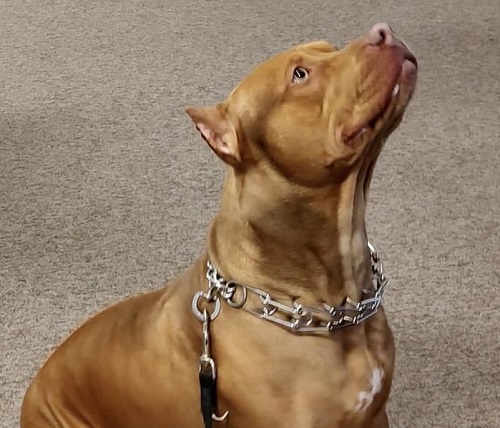 Above: Are you missing this gorgeous guy? Or do you recognize him? If so, Southborough Police encourage you to call in. (photo cropped from Facebook)

For days the Southborough Police received reports of a dog in the woods near 911 field off of Acre Bridge Road. The dog is now safely in custody but no owner has claimed him.

They suspect he may have been abandoned in the woods. But they are still hoping that an owner will come forward.

He is wearing a chain-style choke collar and has a very friendly temperament. Please share with your friends and family and contact us at (508) 485-2121 if you have any owner information. Thank you! 🐕

This morning, Chief Ryan Newell confirmed an owner still hasn’t been identified. He asked me to share that the choke collar was removed quickly after he was brought in. (They kept it on while bringing him in, since it took them 3-4 days to successfully retrieve him. The photos on Facebook were taken immediately after his arrival at the station.)

Newell shared that the dog appears to be healthy and he doesn’t have a microchip.