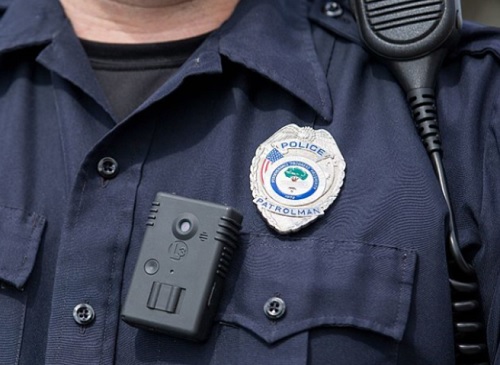 Above: Southborough is looking to join other municipalities adding cameras to the equipment their officers wear. (image cropped from Wikimedia Commons)

Last week, our State Senator’s office shared news of a grant that will help the Southborough Police Department purchase body-worn cameras. I followed up with SPD’s chief to ask about the funding, timing, training plans and how the public would be able to access footage.

Here’s what Police Chief Ryan Newell was able to answer at this time.

The chief explained that he scaled back his predecessor’s request in the Town’s Capital Plan for a 3-part bundle to fund body cams, tasers, and cruiser cameras. He plans to keep the current lease for the tasers.

SPD cruisers already have cameras. (That was news to me.) Since Newell considers them to be redundant to the body cams, he plans to phase out the vehicle cameras as they reach their end of life.

Newell pursued the grant to fund the purchase of body worn cameras, associated equipment, camera set-up, and the software required to run the program. The state grant of $78,547 will cover the majority of the program cost. He is currently working on the additional funding.

In answer to my question on timing, including training plans, Newell responded:

I am currently reviewing the proposed Body worn Camera policy with the union. Once the policy is put in place and the cameras are purchased, there will be training provided to the officers. Most likely this will take place within the beginning few months of next year.

There will be some restrictions on access (as well as retention laws for the footage). Those will be listed in a policy that Newell promises will be posted for the public.

Southborough was one of the 32 police departments which the state granted a total of $2,494,752 for purchasing the body cams. An announcement from the Governor’s office explained that “every department that applied for this year’s grant program received either full or partial funding”. It also highlighted:

“With these grant awards, our administration is expanding resources for local departments to expand the implementation of body-worn cameras which are an important tool to enhance accountability, improve investigations and strengthen relationships between police and the communities they serve,” said Governor Charlie Baker. “The investment we’re making in these programs today will help create safer communities for years to come.”

“Strong relationships between police and the communities they protect are vital to ensuring public safety.  Body-worn cameras help increase improve trust in these relationships and help make everyone safer.  These grants are an important investment in our communities,” said Lt. Governor Karyn Polito.

A press release from State Senator Jamie Eldridge’s office quoted him as stating:

There are many Massachusetts police departments who are eager to take this important step in police reform, but lack the funding to do so. . .

I’m honored to announce this grant to the Southborough Police Department to help establish their own body-worn camera program, which will ensure that officers are held accountable, and will help strengthen the relationship between the officers and the Southborough community. I’m proud to have helped pass legislation to create a police oversight and accountability agency back with the police reform bill in 2020; BWC programs will further allow the agency to function effectively and use evidence to investigate allegations of police misconduct. I want to thank the Southborough Police Department for seeking out this grant, and the Executive Office of Public Safety and Security for administering this grant. I hope to see a continued investment in improving and expanding BWC programs across the state in the future.