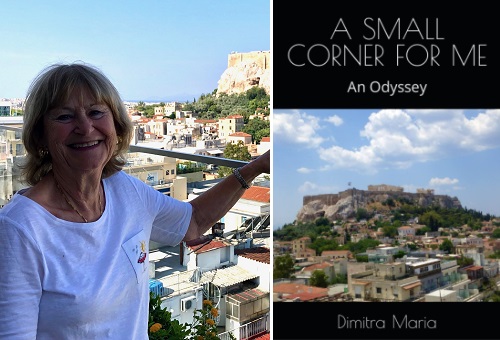 Above: Southborough’s Mary Coldwell’s book shares memories of her earlier life in Greece as Dimitra Maria, including her family’s struggles, and her change in fortune when she was given the chance to come to America. (contributed photo and book cover)

I just learned about another author living in Southborough. This time, its a long time resident who recently was inspired to memorialize first few chapters of her life in writing.

During the pandemic, started writing a few things about her childhood. She explained:

I wanted to do this so my grandchildren would know who I was and  how it was for me growing up during and after the war and how different my life was than theirs.

She found herself writing about the first 18 years of her life, beginning in Nazi occupied Germany during WWII and following her eventual, “life changing” opportunity to journey to America.

Last month, she published the paperback memoir, “A SMALL CORNER FOR ME: An Odyssey”. In honor of her roots on which the book focuses, her pen name is her original first and middle name “Dimitra Maria”.

The first eighteen years of Dimitra Maria’s life were an Odyssey. She was born exactly a year before Greece was occupied by Germany in World War Two. She lived through starvation, the horrors of war and the financial ruin of her parents, which forced her family to live together in one room for ten years. Despite the circumstances, Dimita Maria stayed optimistic and dreamed of going to America one day. She took English lessons during school in hopes that her dream would someday come true. Then the opportunity came through an American Field Service Exchange Student Scholarship, which changed her life forever

In the book’s prologue Dimitra Maria explains that her story isn’t just her own, it’s her family’s:

A large part of this story is also about my parents’ ordeal during the war. My mother and father spoke about their dramatic experience so many times, it felt like it was happening to me, and in a way, it has become my own.

The book is dedicated to her mother:

who with her endurance, love and sacrifice taught me that I could be strong and fulfil my dreams.

To read a sample and order the book through amazon, click here.