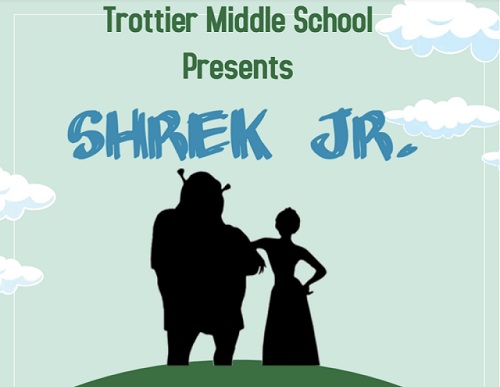 Trottier Middle School is putting on two performances of the comedy musical featuring the wisecracking giant ogre and donkey and a score of fairy tale characters.

The shows are scheduled for Friday evening and Saturday afternoon. Tickets are $5 at the door.

Below are more details from the school’s release: 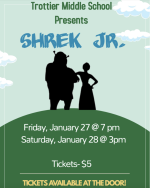 Nasty will be nice and Southborough will be ogre-the-moon when Trottier Middle School students present their production of Shrek The Musical JR. The family-friendly musical comedy follows the adventures of an ogre named Shrek who sets off on a quest to save a princess from a dragon. However, it turns out that in order to ultimately succeed, Shrek must battle an even bigger obstacle: learning how to believe in himself and open his heart to others.

Shrek The Musical JR. follows an ogre named Shrek (AJ Phaneuf) who has learned the hard way that “people hate the things they cannot understand.” For many years he has protected himself from the hurtful actions of those who are scared of him by living as a recluse in a cozy cesspit. One day, his peaceful swamp is disturbed by new tenants: fairytale misfits — including Pinocchio, the Ugly Duckling, the Wicked Witch, Peter Pan, the Three Pigs, and the Big Bad Wolf — have been banished there by the villainous Lord Farquaad (Connor Phaneuf). In order to gain back his land, Shrek makes a deal with Farquaad to rescue the feisty princess Fiona (Elizabeth Walsh) from a tower guarded by a fierce dragon (Heather Blore). Setting off with his faithful companion, Donkey (Allyson Sutton), Shrek begins the journey of a lifetime filled with adventure, romance, and hilarity.