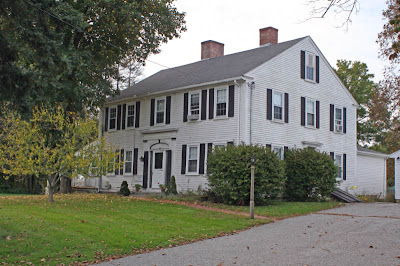 Fay School is expanding in all directions. There’s the current construction of a new dorm on Main St. On the other side of campus, the school has proposed a new classroom building off Middle Rd. Fay presented a preliminary plan to the Board of Selectmen at their October 7 meeting.

The new building would house Fay’s new pre-K and kindergarten program along with existing first- and second-grade classes. The original plan called for demolishing the historic Goodnow House (pictured above) that resides on the site, but Fay revised the plan under pressure from Southborough preservationists.The Goodnow House was built in 1819.

According to southboroughnews.com, construction is likely to being in Spring 2009.

Susan,
Have you had time to do a blog on the shingle-style Kidder house that is slated for demolition. There is a Form B in the 2000 Survey on the significance of the house.
Your’re doing terrific work. Kate