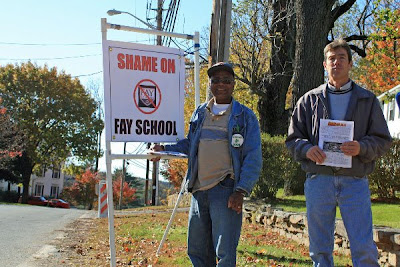 Did you drive by Fay School on Sunday and see a couple of guys with “Shame on Fay” signs? Here’s the scoop.

The picketers were members of the Massachusetts Carpenters Union who were protesting the use of non-union carpenters for the construction of Fay’s new dorm on Main St. The first picketer I talked to claimed non-union labor is used by Erland Construction, the construction management company hired by Fay. The second picketer said the protest wasn’t so much about non-union labor as it was about questionable business practices on the part of Erland and its subcontractors – their literature claims a history of tax fraud, construction failures, and the hiring of felons.