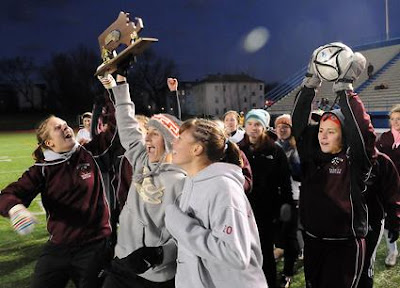 The Algonquin girls scored early and held their lead for a narrow 1-0 win over Wachusett in the Division 1 Central championship round yesterday at Foley Field in Worcester. Senior Carolyn Mukai scored the lone goal. The win means they’re moving on to face the West champion Minnechaug in the Division 1 State semifinals tomorrow at Foley Field (map) starting at 5:00 pm.

It was a different story for the Algonquin boys who lost their Division 1 Central championship match against St. John’s yesterday with a score of 2-1. Algonquin dominated much of the game, but fell behind on a fluke goal scored after a throw-in. The boys finish their season with an impressive 19-1-1 record.

Read all the details about boys and the girls in the Metrowest Daily News.