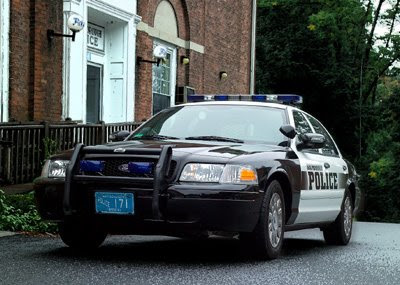 Photo from the Southborough Police Department

Every year the Southborough Police Department replaces two cruisers. This year they hope to replace one of them with an SUV.

At an Advisory Committee meeting last night, Interim Chief Jane Moran explained that the regular cruisers have trouble navigating many town roads and driveways in the snow and ice.

“The town is expanding into previously undesirable lots, and that means hills,” she said. She specifically called out Jacobs Lane, Admirals Lane, and driveways on Presidential Drive and Sears Road as examples of trouble spots.

The SUV would also become an “instant command vehicle,” Chief Moran said. Regular cruisers cannot routinely carry all the equipment required for crime scene investigations because there is not enough room. That means extra trips to the station to fetch equipment when responding to crime scenes.

The two cruisers slated to be retired have amassed 98K and 68K miles, respectively.

“I’m not voting for any more Crown Vics,” he said. “They’re the best 1970’s technology available.”

Chief Moran said smaller cruisers cannot accommodate all the gear they need to carry around, like radio consoles, laptops, and cages to contain passengers in the back seat.

Hamilton expressed concern about the fuel efficiency of Crown Victorias. “We’re taking money that should be going to police overtime and sending it out the exhaust pipe,” he said.