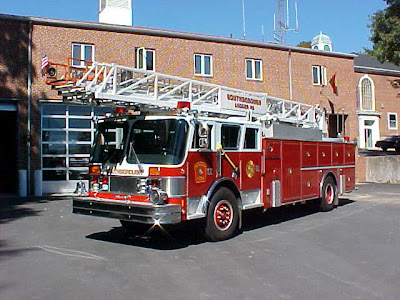 Ladder 26 was permanently decommissioned in November 2007. (Photo from the Southborough Fire Department)

After Saturday’s accident that claimed the life of a Boston firefighter, it’s no surprise that fire engine maintenance is in the spotlight. That accident has been blamed on faulty brakes.

In November 2007, Southborough’s only aerial ladder truck — coincidentally named Ladder 26 just like the one in the Boston accident — was taken out of service after safety problems were found during an annual inspection. In a recent interview with the Metrowest Daily News, Fire Chief Mauro said the issues included fraying cables in the hydraulic system that runs the ladder, as well as rotting cab supports.

In a separate interview in the Metrowest Daily News, Chief Mauro said he has one firefighter who spends most of his time overseeing maintenance of the fleet. “It becomes a maintenance nightmare to keep up with the trucks,” Mauro said. “If it’s that busy for us, I’d hate to see what it’s like in places like Boston, Lowell or Worcester.”

In addition to the permanently decommissioned Ladder 26, Southborough has three engines, two ambulances, a brush-fire truck, a rescue truck and three support vehicles. The engines were manufactured in 1997, 2001, and 2002. All undergo yearly inspections.