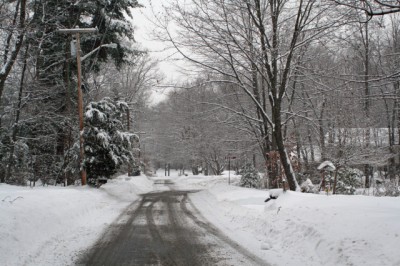 Winter may be only half over, but Southborough has already burned through its entire snow removal budget. The Board of Selectmen last night approved an additional $88K to see the town through the rest of the season.

The amount budgeted for snow removal this winter was $229K. That money was all gone even before the storm this weekend.

Like area towns, Southborough uses contractors to clear the snow on town roads, and a bulk of the money in the snow removal budget goes toward paying those contractors. That cost has been higher than anticipated this year due to overtime.

“Most of the storms have happened on Sundays and that’s double time,” Department of Public Works Director Karen Galligan told the selectmen. That includes the storm this weekend that hit on a Sunday with a second wave on a holiday Monday.

The other factor is the price of salt. The town pays $67 per ton, a 25% increase over last year. Galligan said she budgeted for 2,000 tons for the year but has already used 1,900 tons.

“People want asphalt. They don’t want to drive on any kind of snow. That takes more salt,” she said.

As a cost-saving step, the DPW is considering not salting side roads that are relatively flat.