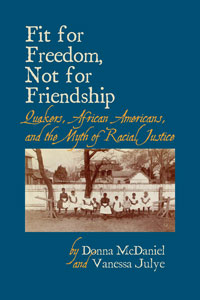 Southborough’s own Donna McDaniel will discuss her new book Fit for Freedom, Not for Friendship: Quakers, African Americans and the Myth of Racial Justice at the library on Tuesday night. The book explores race relations and religion in the United States.

McDaniel has lived in Southborough for 37 years, and was the first woman elected to the Board of Selectmen. You’ve probably also see her byline in the Southborough Villager where she authors a bi-weekly column.

Here’s how the press release for the library event describes the discussion:

While the material focuses on Quakers, there is food for thought for a wider audience. The messages of the book are applicable generally to anyone who has been subjected to widely-accepted prohibitions against equality. The reluctance to discuss often invisible barriers between the races illuminates the consideration of whether we as a nation have typically avoided talking about race and racism.

The talk starts at 7:00 pm on Tuesday and is free and open to the public.

You can find more information on the book, including how to buy it, here. The Southborough Library also has a copy.