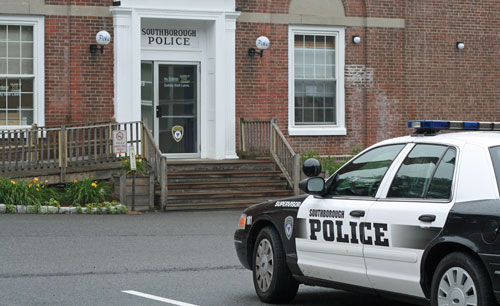 “Are we closer to the goal of getting a new public safety building?” That’s what Chairman Sal Giorlandino wanted to know at last week’s selectmen meeting. The answer isn’t entirely clear.

The Municipal Facilities Committee and the Historical Commission have been working independently on two very different options for a new police station. The facilities committee developed a schematic for a new one-story building that would require the existing building to be demolished. The Historical Commission is promoting a renovation/addition scheme that would save the existing building.

Needless to say, the two groups don’t necessarily see eye-to-eye. But last week selectmen instructed to two committees to work together “in the best interest of the town.”

Town meeting strategy
And with the special town meeting only 8 weeks away, the clock is ticking. Selectmen have to decide which plan or plans to present to voters at town meeting. Should they present multiple plans and let voters choose? Or should they pick one to endorse?

“If we present multiple plans at town meeting, the chances of anything getting approved is slim,” Chairman Sal Giorlandino said.

Former selectman Roger Challen who attended the meeting, agreed. “There is a much better chance that the plan will be accepted if the committees are aligned.”

But for that to happen, the Municipal Facilities Committee and the Historical Commission have to get on the same page. The two committees will hold a joint meeting later this week to start discussions.

The buy (not build) option
But don’t forget, there’s also the wildcard that is 150 Cordaville Road. The property recently came on the market and town officials toured it with a new public safety complex in mind.

Selectmen asked the Municipal Facilities Committee to come up with an “action plan” that would consider things like renovation costs and what to do with the existing police and fire stations should the departments move to 150 Cordaville.

But not all selectmen agree pursing the property would be a good idea. Selectwoman Bonnie Phaneuf said both the Municipal Facilities Committee and Historical Commission have developed plans that would meet the town’s needs. “They have all the information to develop something, and to now want to move someplace else, I don’t get it,” she said. “My biggest fear is that nothing will happen.”

The debate over the police station has been going on for a long time. I have seen emotionally charged arguments on both sides about whether we need a new police station or not. I haven’t quite made up my mind on this yet, but here are some points one must consider:

1. The police station could use some renovation. Police Chief Moran graciously gave us a tour of the inside. It needs a bigger Sally port, some locker room renovation, upgrades to the equipment, a bigger dispatch area, etc. The Chief can probably give the whole laundry list.

2. The price tag for the police station is pretty high from either plan from the Municipal committee or the Historical commission. The current estimate I believe is around $8 million, which doesn’t include the cost of moving the police station back and forth, etc etc. Mrs. Phaneuf has also made the point that historically we have had huge cost over-runs, so lets assume we have a 20% overrun (naysayers will say that a well-managed project doesn’t have to have such a high overun, but from what I understand historical data doesn’t support small overruns). If that’s the case, we are looking at upwards $10 – $12million. Recall that police station renovation, unlike schools, are not funded by the state, so it is all on us.

3. The question is whether the town can really afford such a high level of debt at this point. The advisory committee has argued that such a level of new debt would take our debt-to-budget ratio from 12%-ish to 15% — perhaps one of the highest in the state of Massachusetts. One of the advisory committee members have wondered whether it would make sense to put this plan on hold for now till the debt level reduces and then revisit this plan since that way we may be able to fund the police station without increasing property taxes (since the debt level from all the school renovations, etc. in the past is starting to come down slowly and there isn’t much to renovate in the schools finally :-)).

4. One thing to consider is whether property values are affected by a new shiny police station. The answer many believe is no. When new folks come into town, they look at schools, but not the police stations.

5. Part of the reason people are arguing for a police station is for future growth over the next 40 years. I understand this is based on some “master plan”, which I haven’t seen, but that was drawn out several years back. Unfortunately, the master plan projections on population growth in Southboro may be incorrect. The recent data from the past five years show that population growth has been close to zero or increased very slightly year over year. In contract, prior to that because of significant new development in Southborough, its population had been skyrocketing up. So, now the question is: do we still believe we will have a skyrocketing population in Southborough in the next 10 – 40 years? If so, then we may have to consider extending the police station. If not, then wouldn’t it be prudent on us to reconsider whether we want to fund a police station with 10s of millions of dollars.

6. Finally, people keep forgetting that there are actually THREE plans for police station renovation: one from the Municipal committee, one from the historical commission, and one sponsored by Mrs. Phaneuf on in-place renovation of the police station without any extension. I am ignoring the 150 Cordaville Rd discussion since there is no time to develop a plan for that prior to the Fall meeting, even though Mr. Giorlandino insists on creating a proposal for that. The scary part of the 150 Cordaville Rd discussion is that it may require moving the Fire station as well … more debt, go figure!!

In all my interactions with the Municipal facilities committee, Historical Commission, and Town officials, I have one found one consistent theme. Everyone is trying to do what he/she believes is the “right” thing for the town. I think this is great that we have so many passionate people working for the towns interests. Makes one feel lucky to be living in such a town.

I believe it is through more debates and transparency that the town can decide what’s best for it and whether we want a police station as an eye-candy for the town or whether we truly need one soon. And, I am yet to make up my mind on that.

Excellent post, Shubu! One other wild card we should consider is the school study which I believe is just getting underway. Do we need Finn, Woodward, Neary, and Trottier for our K-8 population, or is there a 3-school solution that will work? If so, the town would gain plenty of unallocated space–which could accommodate police/fire/etc.

Instead of rushing to a decision in a Special Town Meeting, perhaps we should let some of this play out over the next 6 months and revisit in our April town meeting.

Needless to say I was very surprised by the position of the K8 School Committee members and their inherent assumption that the Advisory Committee is biased (and the K8 school committee is not, right? :-)).

But then again we will live for surprises every day :-).

Lets wait to hear what the K* group finds out.

Why isn’t the town looking at buying the land at the old Diebold building which is directly across Rt 85 from the transfer station? Great location.