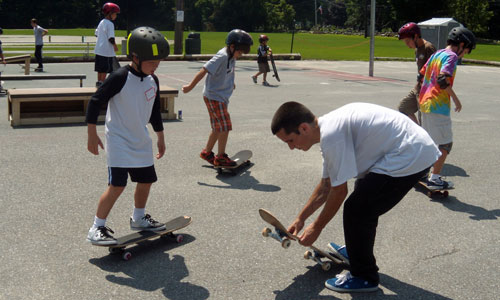 The Southborough Recreation department sponsored a skate board clinic this weekend. Here’s a report from Rec Director Doreen Ferguson:

Southborough Recreation and Eastern Boarder ran our first Free Skate Board Clinic this past Saturday. It was a tremendous success. The 20 participants that attended were excited to be there and really enjoyed interacting with the skaters from Eastern Boarder.

Steve Ryan from Eastern Boarder was the co-coordinator for the event. He also had several Eastern Boarder skaters/employees to instruct the kids. In addition, we had our own Southborough Skaters there to assist, James Falconi, Cameo Fucci, Chris Paoletti, Derek Rice. Not only did Steve bring volunteers but he also brought 3 ramps that kids got to try. After an hour of instructional skate we all got out of the sun and ate some lunch, which residents Nancy Falconi and Suzy Green helped prepare, then back to some more skating. Eastern Boarder then did a demo for the kids to show them more tricks and they wrapped up the day giving out some cool stickers and posters. We also had a drawing for a $50 gift certificate from Dick’s Sporting Good, which was won by the Carulli family.

Because there is a lot of interest in skateboarding Recreation will be offering it through our recreation after-school programs (RAP) at Woodward and Neary this coming Fall.

I would like to thank Eastern Boarder and Southborough Skaters for all their support and volunteer time.

No doubt the skaters would love to try out their new skills at a town skateboard park.